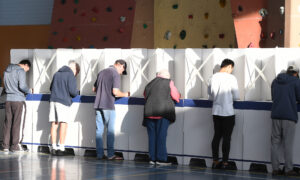 Tasmanians are heading to the polls for an election where leaders of the two major parties have pledged not to govern in minority.

The Liberal government is seeking a historic third term on Saturday after calling the election a year ahead of schedule.

But there is an increasing feeling the level of support for the Labor opposition, and high-profile independents in the Hobart electorate of Clark, could result in a hung parliament.

Premier Peter Gutwein, who has said the Liberals won’t try to govern in minority, voted alongside wife Amanda in Launceston.

“Voters have a choice between certainty, stability, and a majority Liberal government or a minority government that will take us backwards,” he told reporters.

The Liberals retained power in 2018, winning 13 seats, a narrow one-seat majority, in the 25-seat lower house.

An early election was called in April after Speaker Sue Hickey quit the Liberals to sit as an independent, plunging the government into minority.

Speaking on Friday, Labor opposition leader Rebecca White said she wouldn’t lead a minority government, and no one from her party would either.

“We’re campaigning to win. I’ve said throughout this entire campaign that is the only thing that I’m working on,” she said.

“My only focus and the only focus of my team is to win majority Labor government.”

Gutwein and the Liberals experienced a surge in popularity due to their coronavirus management but a recent voter survey indicated their backing could be on the slide.

Polling by uComms for the Australia Institute had the Liberals on 41 percent, Labor 32 percent, the Greens 12 percent, and independents 11 percent.

“I’m feeling more confident because so many people have been supportive and it has been a wonderful campaign,” Hickey said on Saturday after casting her vote in Hobart’s northern suburbs.

“People have been so disillusioned with a majority government. They are looking for change and I’m hoping that I can be that change.”

Gutwein, who is facing voters for the first time as premier after taking over as leader in early 2020, has pointed to the state’s strong economic rebound out of COVID-19.

Labor, which has nine seats, says Tasmania’s stretched health system means it is time for change after seven years of Liberal government.

Gutwein is continuing to stand by embattled Braddon candidate Adam Brooks, who is accused of creating a online profile using a fake name and dating a woman using the alias.

More than 45,000 of Tasmania’s 392,000 registered voters have already cast their ballots through pre-polling and postal votes, a figure estimated to reach 60,000. Polls close at 6pm.

A member of staff uses a needle and a phial of Pfizer-BioNTech COVID-19 vaccine to prepare a dose. (Photo by JUSTIN TALLIS/AFP via Getty Images) OAN NewsroomUPDATED 12:35 PM PT – Friday, January 1, 2021 […]