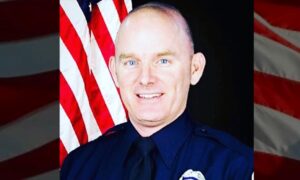 A police chase in Arizona on Thursday resulted in the death of one officer while critically injuring another, authorities said Friday.

The Chandler Police Department said one officer died as a result of his injuries after the suspect attempted to flee the lot of the San Tan Ford dealership with a stolen vehicle and struck multiple officers and one of the dealership’s janitorial employees.

Authorities have publicly identified the officer who succumbed to his injuries as Christopher Farrar—an 18-year veteran of the force.

“It is with heavy hearts that we announce the passing of Chandler Police Officer Christopher Farrar,” the department wrote on Twitter. “Officer Farrar was struck and killed by a suspect driving a stolen vehicle earlier this evening.”

It is with heavy hearts that we announce the passing of Chandler Police Officer Christopher Farrar. Officer Farrar was struck and killed by a suspect driving a stolen vehicle earlier this evening. He was a 18-year veteran of the Chandler Police Department. pic.twitter.com/msQ19LT70L

The second officer was from the Gilbert Police Department and currently remains in critical condition with a severe head injury.

The chase involved law enforcement officers from multiple agencies and also forced the temporary shut down of Chandler Municipal Airport in Maricopa County after the suspect drove into the runway of the airport, police said in a statement.

The chase was prompted after a deputy with the Pinal County Sheriff’s Office attempted a traffic stop around 10 p.m. because the suspect was speeding on a highway north of Eloy.

Police said the suspect fled in his vehicle as the deputy approached him and fired multiple gunshots at him as he was going into a pursuit.

The chase continued into Chandler—a city southeast of Phoenix—where the suspect drove into the runway of the airport and then got back on the freeway while driving the wrong way.

He then eventually crashed his vehicle near a ramp and fled on foot into a motorplex where he stole a vehicle from a Ford dealership. As the suspect attempted to leave the dealership, he struck the officers and the employee.

Authorities confirmed three deputies from Pinal County and four DPS Troopers fired shots at the suspect. He was injured and taken into custody before being transported to a hospital for non-life-threatening injuries.

Chandler Police Chief Sean Duggan said the slain officer touched many lives during his 18 years on the force.

“I just ask that you keep Chris’s family in your thoughts and prayers, and take a moment and be mindful of the brave men and women who are out there daily helping keep our communities safe,” Duggan said.

OAN NewsroomUPDATED 6:18 AM PT – Tuesday, December 21, 2021 In the second part of an exclusive interview, Sen. Marsha Blackburn discusses how Democrats may be showing hypocrisy by opposing election integrity laws in red […]