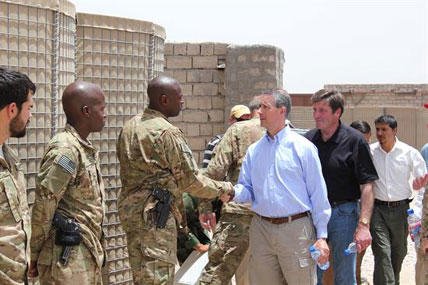 Service members can expect another pay raise next year, despite the pressure on defense budgets from the trillions the government has already spent to combat the novel coronavirus pandemic, the ranking member of the House Armed Services Committee said Thursday.

“I do, I do” foresee a pay raise next year “as a way to show people we value them,” said Rep. Mac Thornberry, R-Texas. He indicated it would be in the range of the 3.1% increase that took effect this year.

“I would expect the pay raise to be included” as Congress works to shape the next National Defense Authorization Act, he said.

“If you look at everything we do related to the military and national defense, people are number one,” Thornberry said in a telephone conference call with defense reporters.

Pay is a factor in attracting the best people to military careers, he added.

“Nobody does it for the money,” he said, “but it is at least a factor in families deciding whether they want to join or stay in the military.”

Despite concerns about government spending in response to COVID-19, Thornberry said, the military will still need to recruit and retain high-quality personnel once the pandemic comes under control.

“What I do know is that, on the other side of COVID, the world is not going to be a safer place than it has been,” he said.

This year’s bump marked the first time since 2010 that a military pay raise has been above 3%.

The 3.1% raise translated into about $815 more a year for junior enlisted troops. For senior enlisted and junior officers, the raise was about $1,500 more. For an O-4 with 12 years of service, the raise meant about $2,800 more.

Thornberry’s remarks on the pay raise came after Defense Secretary Mark Esper warned of the potential of a flat budget.

He raised the possibility of cuts to so-called “legacy” weapon systems because of the mounting national debt accumulated in the costly effort to combat the coronavirus and shore up a devastated economy.

Internal discussions on the defense budget have been “a little bit more acute” in recognition of the fact that  “Congress has generously put, what, $3 trillion into the economy in the past couple months and that puts a tremendous load onto the debt — the national debt and that puts a strain on the economy,” Esper said.

Thornberry also recognized the pressure to limit defense spending, but said the military’s needs should be considered in the form of a supplemental if Congress moves to pass another coronavirus relief package.

“I absolutely believe the military and our national security efforts have real legitimate needs that have to be considered if there’s another bill,” he said. “My bottom line is that this pandemic is changing a lot in the world. We don’t want to come out weaker than when we went into it.”

He stressed the importance of being guided by the National Defense Strategy’s focus on great power competition, particularly in the Indo-Pacific region to counter China.

“I bristle a little bit” at suggestions to cut defense spending, said Thornberry, who will be retiring at the end of this year. “You’ve got to be ready to defend the country on the other side of COVID.”

Several civilians working at Sasebo Naval Base in southwestern Japan have lost their base access and are facing disciplinary hearings for violating a coronavirus public health order, installation commander Capt. Brad Stallings announced this week. […]

How a Navy destroyer operating in the Pacific picked up coronavirus cases remains a mystery, but the top defense official said this week that a drug-smuggling vessel could be to blame. The destroyer Kidd became […]