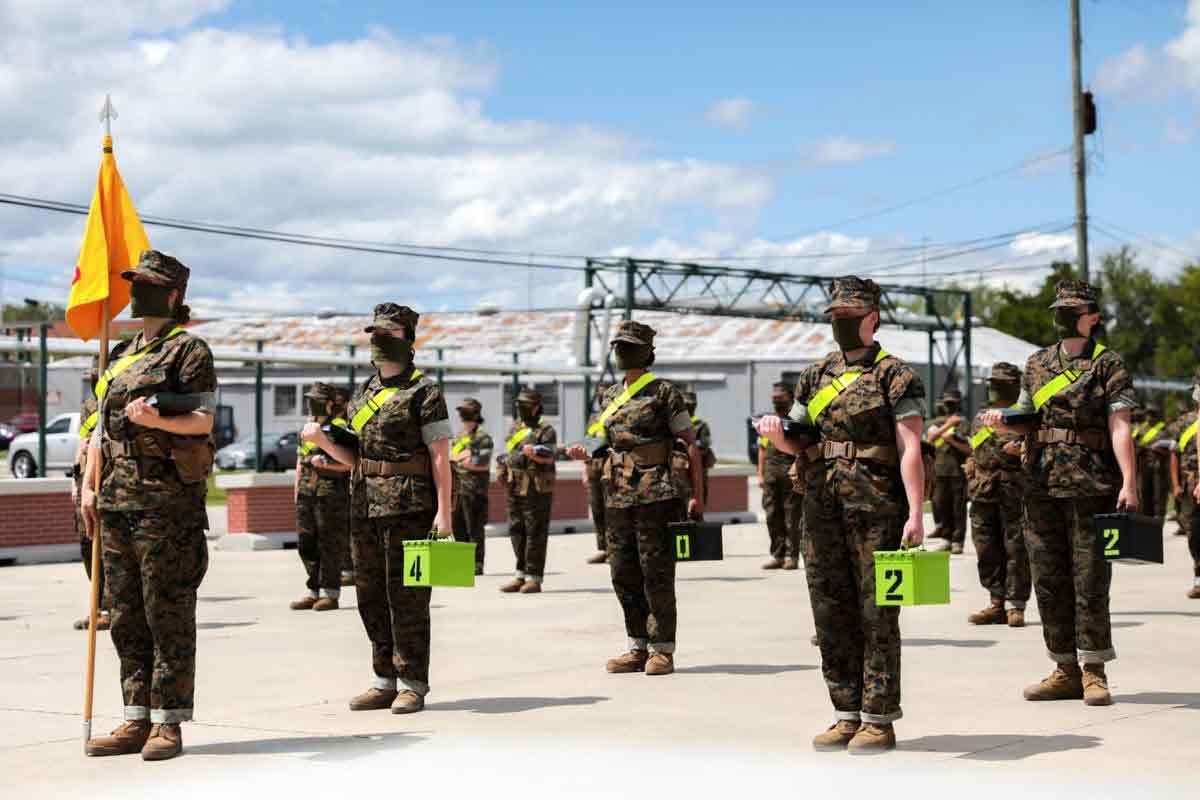 Hundreds of Marine poolees arrived at boot camp in South Carolina last week, but their training experience during the novel coronavirus pandemic will be anything but ordinary.

Drill instructors and recruits are wearing masks; dining halls and squad bays have been reconfigured to put more space between recruits; and families can now ship cell phones to the training depot.

Those are just some of the changes in place a week after Marine Corps Recruit Depot Parris Island began accepting new recruits again. The famous training base shut down incoming shipments of recruits last month after at least 20 people there tested positive for COVID-19, the illness caused by the coronavirus, spread on base.

Now about 300 future trainees, which the Marine Corps calls poolees, are in their second week of quarantine at a new expeditionary staging area on the base. They began arriving at Parris Island on April 20, Capt. Bryan McDonnell, a Parris Island spokesman, said.

The poolees won’t be allowed to move into squad bays for two weeks as they undergo twice-a-day checks from medical personnel to make sure they don’t carry COVID-19 into training areas. The new staging area can hold more than 500 people, McDonnell said.

Military leaders have been hesitant to curb entry-level training, which they say is necessary for maintaining force levels necessary to meet national security requirements. Recruits train, sleep and eat in large groups and tight quarters though, and drill instructors aren’t exactly known for keeping the Center for Disease Control and Prevention’s recommended 6-feet distance to prevent the spread of coronavirus.

All the services temporarily halted new shipments of trainees as leaders rushed to implement new guidelines to help prevent possible spread at the training camps. Graduations and family day events remain closed to the public, and new Marines now ship straight from boot camp to their follow-on training.

Parris Island is now allowing new Marines who’ve completed the grueling three-day Crucible training event at the end of boot camp to be shipped a cell phone. Officials at Parris Island recently said in a social media post that family members of Lima Company could mail their Marine a phone.

“As they complete the Crucible, it will be distributed to them by their drill instructors at the appropriate times,” the message, posted on April 20, states. “They will *not* have unlimited access to their phones, as they are still in a training environment. This measure is to ease the flow of communication as new Marines transfer directly to follow on schools, in response to temporary COVID-19 measures.”

McDonnell said they haven’t tracked the total number of phones that have been mailed to the depot since they began allowing them. Families, parents or friends can send them by standard mail at the same address they use to mail letters to recruits, he said.

The Marine Corps announced last week it was temporarily waiving its Physical Fitness Test requirements due to the coronavirus pandemic. That won’t be the case at boot camp though where recruits must still meet that requirement, McDonnell said, along with completing the Combat Fitness test and some Marine Corps Martial Arts Program training.

“Currently there are no plans to suspend those requirements, however the training schedule has been heavily modified to minimize risk while accomplishing our mission,” he said. “This includes delaying MCMAP until approximately 30 days after arrival to MCRD Parris Island, virtual classes, social distancing adherence to the maximum extent possible, and the wearing of cloth face masks.”

MOSCOW — The Russian military said one of its helicopters crash-landed in an uninhabited area north of Moscow late Tuesday, killing all crew members. The Defense Ministry said the incident involving a Mi-8 helicopter occurred […]