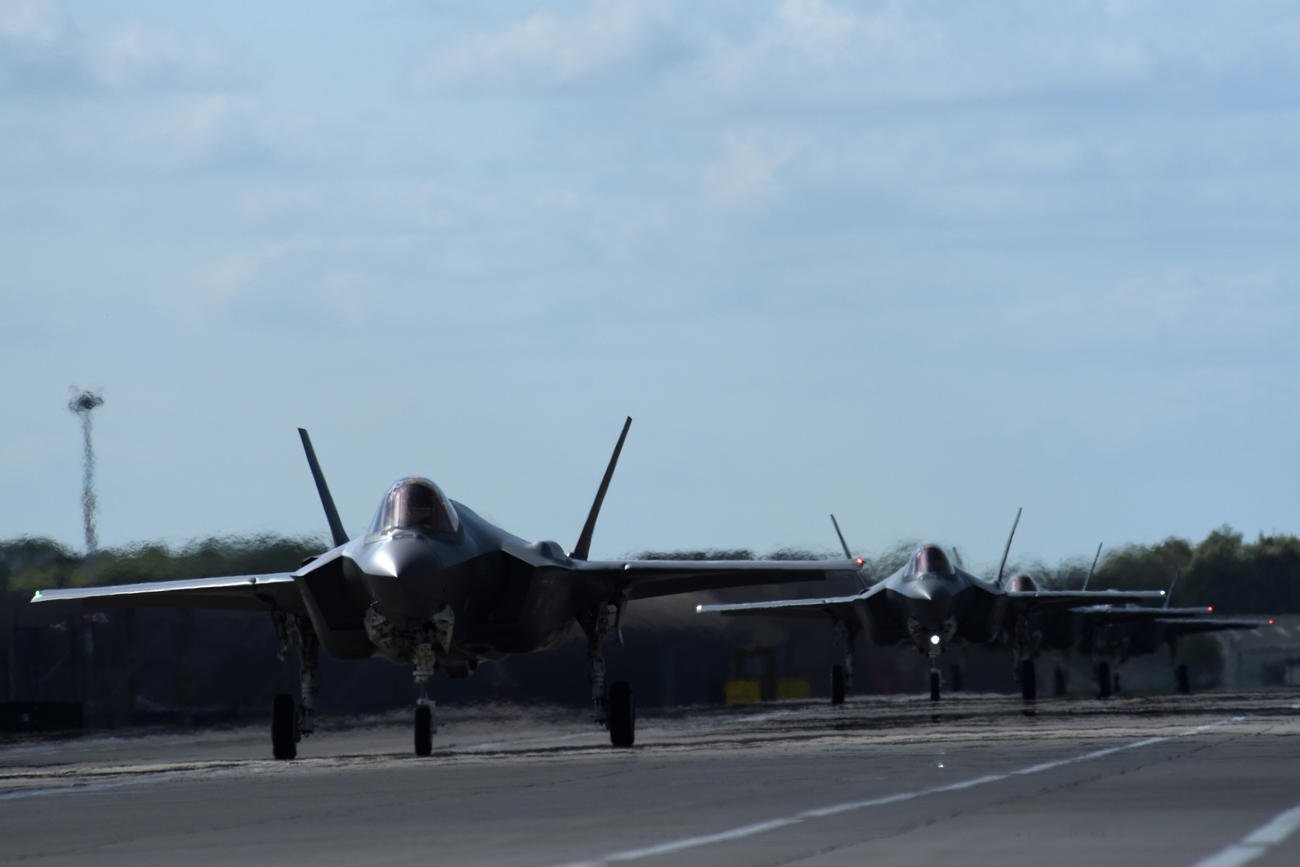 Despite reports that U.S. senators are considering blocking future forward-deployments of American fighters and spycraft to the United Kingdom, the U.S. Air Force says it’s not changing its near-term plans.

Last week, The Telegraph, a British newspaper, was first to report that Sen. Tom Cotton, a Republican from Arkansas, had proposed an amendment to the 2021 National Defense Authorization Act to halt deployments of the F-35 Joint Strike Fighter to Royal Air Force Lakenheath over the U.K.’s choice to allow Chinese firm Huawei to build that nation’s 5G communications network.

The report followed another story from The Telegraph stating that the U.S. is also looking to pull back its RC-135 Rivet Joint reconnaissance aircraft in the region over the security risks posed by the network.

A spokeswoman for U.S. Air Forces Europe said that, while potential negotiations are ongoing between officials in Washington, D.C., and British counterparts regarding Huawei, “At this point, we have no plans to alter the number or type of aircraft that fly out of our U.K. bases.”

The Air Force also flies aircraft out of RAF Fairford and RAF Mildenhall.

“There’s no change in our planning for [Air Force] F-35 coming over here, and anything that would be decided at higher levels will be worked up at that level,” Gen. Jeffrey Harrigian, head of USAFE, told Military.com in an interview last week.

“As of right now, we’re moving out, as with the plans that we have for our F 35s coming here next fall. We’re going to continue to plan and move on on the infrastructure and the work that we’ve got ongoing to support that platform coming here to Europe,” he added.

The service eventually plans to house two squadrons worth of F-35A conventional take-off and landing stealth fighters at RAF Lakenheath, bringing in an additional 1,200 service members and 48 aircraft assigned to the base’s 48th Fighter Wing.

The first Lightning II jet is expected to arrive in fall 2021, making Lakenheath the first permanent U.S. F-35 base in Europe. The jet first deployed to the base in 2017.

The move to potentially curtail the F-35’s deployment has raised concerns for the U.S. ally, which flies the F-35 short-takeoff and vertical landing (STOVL) version, the B-variant. The U.S. Marine Corps also flies the B-variant.

Following the Telegraph reports, Tobias Ellwood, chair of the Defence Select Committee in the House of Commons, sent a letter to U.K. Secretary of State for Defence Ben Wallace for further clarity on the situation, Janes reported.

“If passed, this would preclude the long-planned USAF deployment of F-35s at RAF Lakenheath, and could also bring into question the plans for HMS Queen Elizabeth to carry US USMC F-35s,” Ellwood wrote, according to the Janes report.

“I am sure you agree with me that even the airing of such disagreements between us and our closest security ally is unhelpful in a time when global stability is at the lowest it has been for a generation,” he said. “I should therefore be grateful if you could clarify what the [U.K.] government is doing to ensure that this initiative is not pursued further.”

Britain has talked up the possibility of isolating networks using Huawei routers while keeping other segments of the network secure, but Thornberry said U.S. technical experts have questioned the workability of the proposal.

“We need to try to understand the vulnerabilities,” he said. “The United States has tried to encourage the Brits and other allies not to buy Huawei [hardware].”

He said Huawei’s efforts in Britain appear to be part of a “deliberate strategy by China to infiltrate their equipment throughout the world’s telecommunications networks,” but added that the impasse had not yet reached the stage of the break the U.S. had with Turkey last year.

The Pentagon in July officially booted Turkey, a NATO ally, from participating in the program over its purchase of the Russian-made S-400 surface-to-air missile system and asked students — pilots and maintainers — attending F-35 training in the U.S. at Luke Air Force Base, Arizona, and Eglin Air Force Base, Florida, to leave.

The JSF program was founded by nine partner nations: the U.S., the United Kingdom, Italy, the Netherlands, Turkey, Australia, Norway, Denmark and Canada — though Canada has not committed to buying the aircraft. Foreign Military Sales customers include ­Israel, Japan, South Korea and Belgium.

In September, the U.S. opened the door to Poland as a potential F-35 FMS customer. Then earlier this year, the U.S. government greenlit the sale of the F-35 jet to Singapore, potentially expanding the fifth-generation program in the Pacific.

— Richard Sisk contributed to this story.