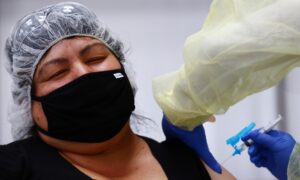 LOS ANGELES—Gift cards, cash and sports tickets are among the items up for grabs today and in the coming weeks in Los Angeles County—and across the state—as authorities pull out all the stops to convince people to get vaccinated against COVID-19.

On May 28 only, people 18 and over who get their first dose of vaccine at one of four designated sites in Los Angeles County received a $75 Target gift card.

Meanwhile, anyone across California who gets their first dose—and eventually goes on to get their second—will receive a $50 gift card from the state. Those cards will be either a pre-paid MasterCard or grocery store gift cards for Kroger or Albertsons markets. The giveaway began May 27 and will continue until the supply of 2 million gift cards is exhausted.

The gift card offer is part of a landmark $116.5 million incentive program announced May 27 by Gov. Gavin Newsom. As part of that program, anyone who has received at least one dose of vaccine in the state by June 4 will be entered into a drawing for $50,000 in cash. Fifteen winners will be selected, followed by another 15 on June 11 for people receiving at least one dose by that date.

On June 15, the date the state plans to scrap the vast majority of its COVID-19 health restrictions, the state will draw the names of 10 vaccinated residents, each of whom will receive $1.5 million.

Newsom called it the “most significant incentive program in the United States of America.”

Everyone who has received at least one dose of vaccine by the various drawing dates will be automatically entered. There is no need to register.

Newsom noted May 27 that demand for the vaccines has dropped in recent weeks. He said the state has administered about 1.9 million doses over the past week, down from a high of around 3 million per week. To date, more than 37 million doses have been administered in California.

Also in Los Angeles County this week, anybody who gets vaccinated a county- or city-run site through June 3 will be entered into a drawing for a chance to win season tickets to either the L.A. Kings or L.A. Galaxy.

People vaccinated at St. John’s Well Child and Family Center sites will also be entered into that drawing. The drawing is open to anyone who receives their first dose, or brings someone with them on their second-dose appointment.

Afghan soldiers pause on a road at the front line of fighting between Taliban and Security forces, in Badghis province, northwest of Afghanistan, Wednesday, July, 7 2021. From the early hours of Wednesday morning, battles […]