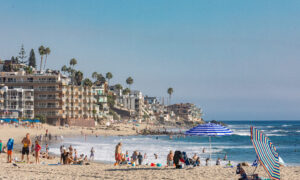 A new outdoor emergency system to alert residents of disasters was put to the test May 27 in Laguna Beach, Calif.

“Nothing presents a greater risk to our public safety than a wildfire or a major earthquake,” Laguna Beach Mayor Bob Whalen said in a press release. “This outdoor emergency warning system will save lives in the event of a major disaster.”

The emergency system consists of 21 loudspeakers that are strategically placed around the city to inform residents and visitors of critical information during an emergency.

The outdoor system alerts are intended to reach the city’s most vulnerable neighborhoods along the wildland-urban interface, flood-prone areas, and beaches, emergency operations coordinator Brendan Manning told The Epoch Times.

“Recent wildfires and emergencies in California have shown the need to have redundant methods of alert and notifications, and the Outdoor Warning System provides that,” Manning said. “The city plans on using the system to alert residents of wildfires, floods, landslides, or tsunamis.”

When an emergency strikes, residents and visitors will receive audible tone and verbal instructions about how to proceed. The instructions may include evacuation, shelter in place, or other critical time-sensitive information.

The emergency system is a part of the city’s 2019 Wildfire Mitigation and Fire Safety Plan that aims for readiness to reduce emergency risks.

Other safety tactics the city plans to implement include a helipad refilling station and an evacuation time study.

Saudi Arabia plans to sell a 1 percent stake in Aramco, the world’s largest oil company. Based on the company’s market value, the potential sale could be worth $19 billion. It is believed that the […]

SAVANNAH, GA – DECEMBER 15: A nurse shows off a vial of the Pfizer-BioNTech COVID-19 vaccine outside of the Chatham County Health Department on December 15, 2020 in Savannah, Georgia. (Photo by Sean Rayford/Getty Images) […]