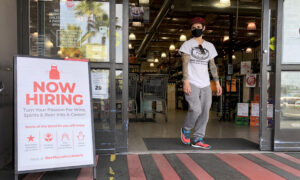 WASHINGTON—U.S. jobs growth for April was far lower than what the market had predicted, adding to the worries that excessive stimulus payments could have undesirable side effects in the long term, making the road to recovery rocky.

The April jobs report was the biggest miss on record. According to the Bureau of Labor Statistics, the U.S. economy added 266,000 jobs last month versus an estimate of 1 million. The unemployment rate rose to 6.1 percent from 6.0 percent in March.

Some economists believe that the path to full employment could be much longer than expected.

“Going forward, U.S. job gains will be somewhat harder as they will depend on organic growth in demand and not just state and local governments easing of business restrictions,” Scott Anderson, chief economist at Bank of the West in San Francisco, wrote in a report.

The economy is still 8.2 million jobs below pre-COVID levels.

Job gains for March were also revised down to 770,000 from a blockbuster 916,000 additions. The unemployment rate for African Americans rose to 9.7 percent in April, making them the only racial group to experience worsening metrics, according to Economic Policy Institute. Meanwhile, the jobless rate for white workers fell to 5.3 percent.

Business surveys show that the majority of small businesses face difficulties in finding workers. According to a monthly survey by the National Federation of Independent Business, a record level of small business owners (44 percent) in April reported that they couldn’t fill job openings.

Many entrepreneurs have been complaining for months that they can’t compete with the unemployment benefits offered by the federal government.

The Biden administration’s new $1.9 trillion stimulus plan extended the weekly unemployment benefit at $300 through Sept. 6. In addition, the bill included a provision that made the first $10,200 in unemployment benefits received in 2020 nontaxable for households earning $150,000 or less.

Nearly 40 percent of workers could make more on unemployment at the $300 level than they would earn by returning to work, according to American Action Forum, a center-right policy institute.

Rep. Kevin Brady (R-Texas) accused the White House of being “in denial” that many businesses are struggling to hire more people.

“This is a stunning economic setback, and unequivocal proof that President Biden is sabotaging our jobs recovery with promises of higher taxes and regulation on local businesses that discourage hiring and drive jobs overseas,” he wrote in a statement.

Last week, Montana and South Carolina announced that they would end federal pandemic unemployment benefits next month, claiming that these benefits have discouraged people from returning to the workforce and become a drag on the recovery. More states are expected to follow suit.

Yet, the response from Democrats has been completely the opposite; they have been calling on more government spending to heal the economy.

In response to the poor jobs report, House Speaker Nancy Pelosi (D-Calif.) said in a statement “the evidence is clear that the economy demands urgent action.”

“No, nothing measurable,” Biden said when asked by a reporter if the enhanced unemployment benefits had any effect on the weak jobs report.

However, prominent liberal economist Paul Krugman explained the problem of generous unemployment benefits in his book “Essentials of Economics.”

“People respond to incentives,” Krugman wrote. “If unemployment becomes more attractive because of the unemployment benefit, some unemployed workers may no longer try to find a job, or may not try to find one as quickly as they would without the benefit.”

“I don’t think that the addition to unemployment compensation is really the factor that’s making a difference,” she argued.

“We’ve had a very unusual hit to our economy, and the road back is going to be somewhat bumpy,” she said, adding that supply bottlenecks and setbacks in various industries have caused the slowdown in hiring in April.

Another troubling sign in the jobs report was that 219,000 more women had given up on working or finding a job last month.

“It’s clear that the flip-flopping by Washington bureaucrats on guidelines for the safe reopening of schools continues to have a direct, negative impact on the advancement of women in the labor force,” Patrice Onwuka, director at Independent Women’s Forum, said in a statement.

She criticized the Biden administration for “caving to pressure from teachers’ unions.”

Some economists also warn that Biden’s ambitious plan to increase corporate taxes would prolong the recovery of the economy and the jobs market.

John Taylor, economist and former undersecretary of Treasury under President George W. Bush, told The Epoch Times that “the proposals to raise taxes have missed the fact that the tax reform was beneficial” before the pandemic and the economic crisis.

According to him, what really jumpstarted the U.S. economy following the financial crisis of 2007–2008 were the Trump administration’s deregulation efforts and the 2017 tax reform.

“We just can’t lose track of that. I think that should be emphasized more,” Taylor said.

A view of children’s playground equipment immersed in floodwater, surrounding Tewkesbury Abbey, where flood watches are in place with more wet weather expected in the coming days, in Tewkesbury, England, Wednesday Dec. 23, 2020. (Ben […]

Pence thanks American people for ‘privilege of serving’ as vice president

Vice President Mike Pence walks to the West Wing of the White House after addressing staff on the steps of the Eisenhower Executive Office Building, in the White House complex, Tuesday, Jan. 19, 2021, in […]