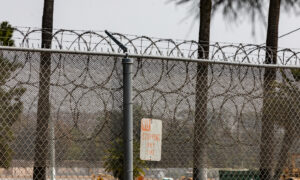 Some councilors in Irvine, Calif. are calling on the Orange County board of supervisors (BOS) to hold a public forum before expanding the James A. Musick Jail Facility.

The facility, which has been vacant and non-operational since July 2019, is currently under construction after the BOS unanimously approved a construction contract to expand the facility on May 5, 2020. The additions will bring two new housing structures and 896 new beds to the jail primarily for those with mental health and substance abuse issues, for a total of approximately 2,200 beds.

The jail sits just a hair off Irvine property in Orange County’s unincorporated land, which gives authority over it to the BOS. Despite not being located within city limits, it still has an Irvine address due to how it was classified by the postal system, according to Irvine councilmembers.

City council will vote during its May 11 meeting whether to approve a motion that would “strongly urge” the BOS to give the community a chance to voice concerns about the planned expansion.

Irvine Vice-Mayor Tammy Kim, who sponsored the bill, said she decided to act on the matter after hearing sentiments of residents who were against expanding the facility for various reasons.

“A lot of the residents came to us, and I share in their concern. And I think if the board of supervisors wants to continue down this path that they should be holding a public session to discuss this.

“It’s a multi-pronged issue. It’s clearly around, is this the way we need to spend our top tax dollars? Number two, do we want to see an expanded jail facility in our city? Is this aligned with our morals and our values? And number three, is incarceration the way to proceed forward when we’re talking about people suffering from mental health and substance abuse?”

The project is said to cost $261 million for construction; its annual operating costs are estimated at $61.5 million.

Irvine Councilmember Anthony Kuo said if the public wants it, then he doesn’t necessarily see a problem with a public forum being held, even though the decision is not up to Irvine.

“This project is pretty far down the line in terms of process, so my suspicion is that [the Board of Supervisors] have done what they need to do in terms of public outreach and hold public hearings. That said, if the community’s asking for it, then what’s the opposition to holding a hearing?”

From Kuo’s perspective, decisions on the jail should be left to the county, since the facility is outside of Irvine’s city limits.

“To the extent that we’re, on behalf of a number of residents, asking the county to look at this and hold some hearings, that’s really up to them to do,” he said. “But I did look at the resolution, I’m not entirely comfortable with the language, but we’ll have to see where the conversation goes on Tuesday.”

Kuo said he does not believe the expansion is a waste of money, given that a lot of state funds are involved, and if they do not use the grants to expand the jail, the money will just go to another jurisdiction.

“The fact of the matter is I think many of those who are asking for this public forum, and who have raised this issue, I don’t necessarily believe, at least through their comments, that they’re in opposition to Musick jail,” he said. “They’re in opposition to the jail component of criminal justice as a whole. They just don’t want jails.”

The Epoch Times reached out to all five supervisors and none were available to comment in time for publication.

Liberal senator Eric Abetz has welcomed a review into the Port of Darwin’s 99-year lease to a company with strong ties to Beijing and the Chinese Communist Party (CCP), saying it was a “serious mistake […]