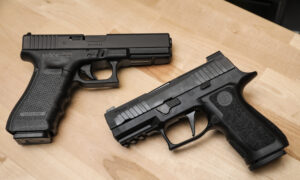 The Oregon Senate on Wednesday passed a bill that would require people to keep unattended guns locked up, ban firearms in the Oregon Capitol building and airports, and would permit schools to ban guns. It now heads to the governor’s desk to be signed into law.

After a brief debate, the “safe-storage” bill, Senate Bill 554, passed the state Senate on a vote of 17-7, with all Republicans voting “no.”

The bill mandates that gun owners secure unattended weapons with trigger locks or in locked compartments. Those who don’t would be strictly liable for any injuries or property damage. If a minor gets ahold of an unsecured firearm, the gun’s owner would face a maximum $2,000 fine.

It would also require that a gun owner reports a lost or stolen weapon within 72 hours when they “reasonably should have known” it was missing.

Democratic Sen. Ginny Burdick of Portland, who introduced the bill, said Wednesday that gun violence is a “public health crisis.”

“We’ve lost far too many loved ones to shootings and today we took a meaningful step toward preventing these unspeakable tragedies,” she said. “Suicides are increasing. Gun violence is increasing. A firearm that is not safely stored is a threat.”

Critics of the bill argue that forcing people to keep guns locked up could waste precious moments if they need to defend themselves against armed intruders.

Opponents have also said the bill is an infringement on the constitutional right to bear arms.

“As usual, the Second Amendment is under attack because attacking it is a perennial favorite with Democrats and has been for years,” James Purvine of Eugene, Oregon said about the bill in written testimony to the House Committee on Health Care.

If signed into law by Gov. Brown, the bill will take effect on the 91st day after the legislature adjourns.

Brown’s office didn’t immediately respond to a request for comment.

One dead, 12 injured by Ariz. Gunman

A police car with lights flashing (Photo: JOHANNES EISELE/AFP via Getty Images) OAN NewsroomUPDATED 7:18 PM PT – Thursday, June 17, 2021 One person has been killed and 12 others injured in eight […]