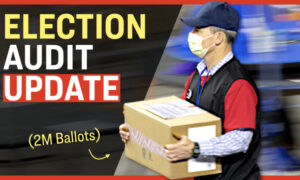 Former Arizona Secretary of State Ken Bennett had expressed confidence that the Maricopa audit process would be finished by May 14. But he told The Epoch Times on May 3 that it could run longer.

The Facebook oversight board has upheld the banning of former President Donald Trump. However, it looks like Trump has launched his own social media platform.

Biden reduces support for S. Arabia in another boon to Iran

People who have been fully vaccinated against the virus that causes COVID-19 are no longer being advised to wear masks outdoors. People who have gotten two Moderna or Pfizer shots, or the single-shot Johnson & […]

Gov. Phil Murphy, D-N.J., listens to President Donald Trump speak during a meeting about the coronavirus response in the Oval Office of the White House, Thursday, April 30, 2020, in Washington. (AP Photo/Evan Vucci) OAN […]