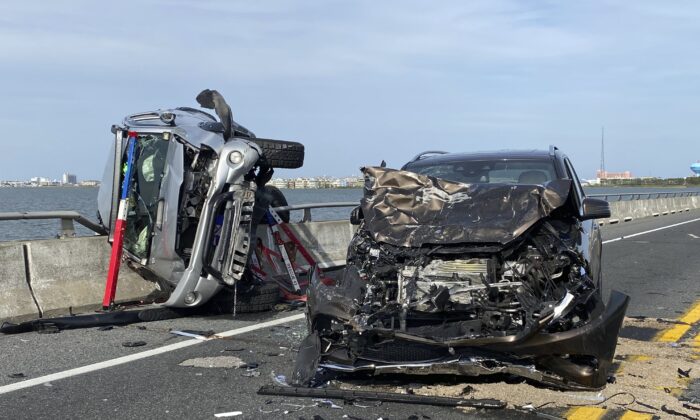 The wreckage from a car accident on the Route 90 bridge in Ocean City, Md., on May 2, 2021. (Ocean City Fire Department via AP)

OCEAN CITY, Md.—A witness to a five-vehicle crash on a Maryland bridge jumped into a bay and rescued a 2-year-old girl who had been ejected into the water while still in her car seat, according to authorities.

The girl was thrown from a pickup truck on the Route 90 bridge in Ocean City on Sunday and landed in Assawoman Bay, the Town of Ocean City said in a statement on Monday. The girl was flown to a Baltimore hospital, where Ocean City police spokeswoman Ashley Miller said she was in good condition. Another seven people were treated at hospitals and released.

Authorities called to the scene discovered one car hanging off the side of the bridge and they believe there may have been multiple crashes. Officials said the witness who rescued the girl has asked to remain anonymous.

Girls Dropped Over Border Wall by Smugglers Reunited With Family

Two Ecuadorian girls who were dropped from a 14-foot-high barrier at the U.S-Mexico border by smugglers near El Paso about a month ago have been reunited with their families. “The Ecuadorian minors aged three and […]