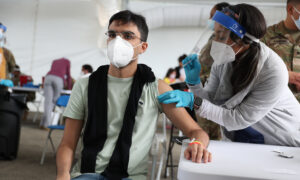 The Florida House on Wednesday approved a bill that would set in law Gov. Ron DeSantis’ executive order banning so-called “vaccine passports,” credentials that could take the form of an app or a physical document that indicate whether someone has been inoculated against the CCP virus, which causes the disease COVID-19.

Lawmakers voted 76–40 to approve the vaccine passport ban as part of a broader emergency bill, called SB 2006, which includes provisions around authorizing emergency funding and limiting local emergency orders, and while seeking to “minimize the negative effects of an extended emergency,” such as those associated with school and business closures.

Part of the measure bars agencies from issuing COVID-19 passports and prohibits Florida businesses from requiring customers to show documentation that they have been vaccinated or have recovered from COVID-19.

“A business entity … may not require patrons or customers to provide any documentation certifying COVID-19 vaccination or post-infection recovery to gain access to, entry upon, or service from the business operations in this state,” states the text of bill, which provides for a $5,000 fine per violation.

State Rep. Tom Leek, a Republican who sponsored the bill, told the News Service of Florida on April 28 that the measure strikes a “delicate balance between protecting people and protecting people’s civil liberties.”

“We must recognize that vaccine hesitancy is real and understandable,” Leek said, according to the outlet. “Don’t get me wrong. For all of you in this room, for all of you who are listening out there, get vaccinated. Please get vaccinated. Let’s return to normal. But recognize that it is fair for a certain segment of our community to be hesitant about getting the vaccine.”

Rep. Omari Hardy, a Democrat, argued against the ban.

“If you care about keeping Florida open, and making sure that we’re not losing jobs due to the pandemic, why would you prevent people from enacting policies that give their customers the assurance, the confidence that they can walk into a business, and that they’ll be safe?” Hardy said, according to the News Service of Florida.

The measure will now head back to the Senate for approval and, later, to DeSantis’ desk for a signature.

DeSantis, who has been a vocal critic of vaccine passports, on April 2 signed an executive order barring their usage in Florida.

“Today I issued an executive order prohibiting the use of so-called COVID-19 vaccine passports,” DeSantis wrote in a tweet. “The Legislature is working on making permanent these protections for Floridians and I look forward to signing them into law soon.”

Vaccine passports have been criticized by civil liberties groups, who say they would potentially violate Americans’ privacy rights while denying key services to people who are not vaccinated.

There have been efforts to impose a vaccine passport ban on a federal level, with Rep. Andy Biggs (R-Ariz.) introducing legislation earlier in April that would ban federal agencies from creating such credentials.

The proposed bill, called the No Vaccine Passports Act (pdf), would set in law prohibitions preventing federal authorities from future issuance of any standardized documentation that could be used to certify COVID-19 vaccination status to third parties, like airlines or restaurants.

The bill would also prohibit proof of COVID-19 vaccination from being a requirement to access federal or congressional property and services, Biggs’ office said in a statement.

“My private healthcare decisions—and yours—are nobody else’s business,” Biggs said in a statement. “Vaccine passports will not help our nation recover from COVID-19, instead, they will simply impose more Big Brother surveillance on our society.”

Federal authorities announced Wednesday that a new round of $1,400 stimulus checks have been sent out, bringing the total figure disbursed to around $391 billion. The Department of the Treasury, the Internal Revenue Service (IRS), […]

The human body’s sophisticated response to stress is nothing short of a miracle. But the reality is that we overachiever stress junkies spend quite a bit of time being “plugged in” and in fight-or-flight mode, […]

U.S. Embassy in Kabul suspends all operations, urges Americans in Afghanistan to shelter in place

The closed entrance gate of the US embassy is pictured after the US evacuated its personnel in Kabul on August 15, 2021. (WAKIL KOHSAR/AFP via Getty Images) OAN NewsroomUPDATED 11:25 AM PT – […]