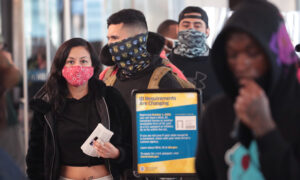 The Supreme Court has been asked to take on the issue of whether the federal government may search the smartphones and laptop computers of travelers at the U.S. border without a warrant or any suspicion of wrongdoing.

The number of electronic device searches at the border rose in 2016 and grew throughout former President Donald Trump’s time in office. U.S. Customs and Border Protection (CBP) officers carried out upwards of 30,000 electronic device searches in fiscal 2018, over three times the number from fiscal 2015, according to the American Civil Liberties Union (ACLU), the Electronic Frontier Foundation (EFF), and the ACLU of Massachusetts, which filed a 377-page petition with the Supreme Court on April 23.

The searches are needed to protect the U.S. homeland, the government says.

The increase in electronic device searches is “driven by CBP’s mission to protect the American people and enforce the nation’s laws in this digital age,” the government said in a statement previously.

“Electronic device searches are integral in some cases to determining an individual’s intentions upon entering the United States,” then-CBP official John Wagner said.

“These searches, which affect fewer than one-hundredth of one percent of international travelers, have contributed to national security investigations, arrests for child pornography and evidence of human trafficking. CBP officers are well trained to judiciously conduct electronic device searches and to protect sensitive information that may be encountered.”

The case is known as Merchant v. Mayorkas, and was originally filed in U.S. District Court in Massachusetts. In November 2019, that court determined that border authorities may search a traveler’s electronic device only if they have reasonable suspicion that the device contains digital contraband. A three-judge panel of the U.S. Court of Appeals for the 1st Circuit overturned the ruling in February 2021.

“This case raises pressing questions about the Fourth Amendment’s protections in the digital age,” Esha Bhandari, deputy director of the ACLU’s Speech, Privacy, and Technology Project, said in a statement.

“When border officers search our phones and laptops, they can access massive amounts of sensitive personal information, such as private photographs, health information, and communications with partners, family, and friends—including discussions between lawyers and their clients, and between journalists and their sources. We are asking the Supreme Court to ensure that we don’t lose our privacy rights when we travel.”

“Border officers every day make an end-run around the Constitution by searching travelers’ electronic devices without a warrant or any suspicion of wrongdoing,” said EFF senior staff attorney Sophia Cope.

“The U.S. government has granted itself unfettered authority to rummage through our digital lives just because we travel internationally. This egregious violation of privacy happens with no justification under constitutional law and no demonstrable benefit. The Supreme Court must put a stop to it.”

According to the ACLU, these searches are often carried out for reasons that have nothing to do with halting the importation of contraband or determining a traveler’s admissibility to the United States.

“Border officers claim the authority to search devices for a host of reasons, including enforcement of tax, financial, consumer protection, and environmental laws—all without suspicion of wrongdoing. Border officers also will search travelers’ devices if they are interested in information about someone other than the traveler—like a business partner, family member, or a journalist’s source.”

The petitioners in the case include a military veteran, journalists, an artist, a NASA engineer, and a business owner, all of whom are U.S. citizens. These individuals weren’t subsequently accused of any wrongdoing. Officials confiscated and kept the devices of several of the individuals for weeks or months afterward.

“It’s been frustrating to be subjected to this power-grab by the government,” Diane Zorri, a college professor, former U.S. Air Force captain, and a plaintiff in the case, said in a statement supplied by the ACLU.

“My devices are mine, and the government should need a good reason before rifling through my phone and my computer. I’m proud to be part of this case to help protect travelers’ rights.”

Trump supporters cheer ‘lock him up’ in response to Biden dealings

LOS ANGELES—After exceeding all expectations with its initial four test flights, the first ever by an aircraft over the surface of another planet, NASA’s tiny Mars robot helicopter Ingenuity is ready for graduation. The U.S. […]