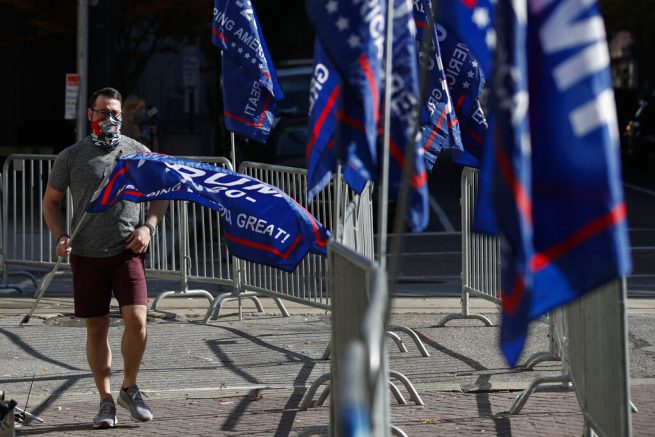 A man sets up flags as supporters of President Donald Trump protest outside the Pennsylvania Convention Center, where vote counting continues, in Philadelphia, Monday, Nov. 9, 2020, two days after the 2020 election was called for Democrat Joe Biden. (AP Photo/Rebecca Blackwell)

Hundreds of President Trump’s supporters flocked to Pennsylvania to contest the election results in which they believe are rigged.

Over the weekend, supporters gathered and chanted the slogan “Stop the Steal” in reference to allegations of voter fraud, which favored Democrat Joe Biden.

The President and many of his followers claimed numerous cases of fraudulent ballots, including tossing out ballots that were for President Trump and adding ballots for Biden.

On Friday, the group was joined by GOP congressmen Jim Jordan of Ohio and Scott Perry of Pennsylvania.

“We’re not asking for too much, we want the ballots and the votes that are counted to be legal, to be valid,” Rep. Perry explained. “We want them to be set, to have a postmark on them either on or before Election Day not after Election Day.”

The Trump administration has said for months the increased use of mail-in ballots would lead to widespread voter fraud across the nation and has promised legal action in several swing states within the upcoming weeks.

RELATED: Alleged examples of voting fraud pouring in despite Democrats insistence of no such thing

‘Pusher’s pursuer’, ‘Rocket science org.’, ‘Part of a henge’, ‘Scottish energy source’, ‘No good deed’, ‘Aghast’, ‘Flexibility’, ‘Achieves again’, ‘Sciences’ partner’, ‘Counterpoison’, ‘Network of blood vessels’, and ‘Immigrant’s hope’ are some of the clues in this […]