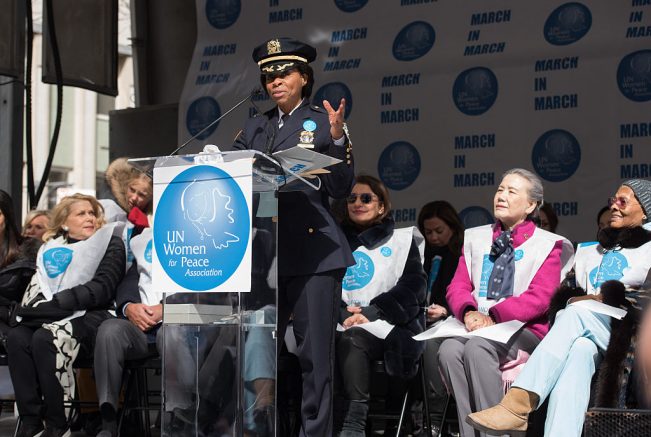 The New York Police Department has named its first woman as Chief of Patrol.

On Thursday, Juanita Holmes made history as the highest-ranking African-American woman in the NYPD.

“I’ve seen her work up close, I’ve seen her leadership skills,” stated NYPD Commissioner Dermot Shea. “I can tell you that she has walked the walk and she talks the talk.”

Holmes will oversee most of the department’s uniformed officers patrolling the city.

Chief Juanita Holmes has been appointed as Chief of Patrol. Chief Holmes will use her understanding of the way violence can afflict city neighborhoods she has served to reduce that violence and keep people safe. pic.twitter.com/ffkW0rtcpy

During a press conference, Holmes said she was humbled and honored to continue to serve the people of New York City, N.Y. She spoke on her role and how she plans to lead going forward.

“In every role I think I’ve played in this department… equality, fairness and transparency have always been at the very heart of what I do,” noted Holmes. “As Chief of Patrol, this is how I will lead every day. I am so grateful for this opportunity.”

Holmes’s appointment is set to officially go into effect on Friday.

Commentary Many, particularly those on the right, worry the United States is turning into China, but we are a Western nation coming out of a (mostly) Western tradition. I believe we should be as much […]