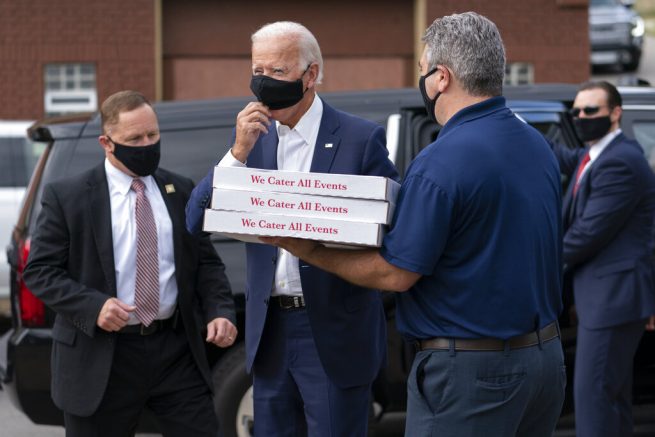 A new video shows Joe Biden getting heckled at his photo-op in Pittsburgh, Pennsylvania.

On Monday, the Biden team staged a photo shoot with the former vice president’s supporters, which included pictures of Biden “delivering pizza” to firefighters.

However, a group of Pittsburgh residents challenged Biden by saying he “finally got out of his basement.” They also reminded Biden of his flip-flop on fracking and corruption schemes in foreign countries.

#Biden was being heckled by a #TrumpSupporters as he arrived to deliver pizzas to firefighters in #Pittsburgh. The man was waving a Trump flag as he stood on top of a truck. Biden’s response to him: “Don’t jump.”

This latest incident comes as the Biden campaign has taken a hit in nationwide polls in recent weeks.

South Dakota Gov. Kristi Noem announced recently that she’s the first candidate nationwide to promise to fight action civics and critical race theory by signing the 1776 Pledge to Save Our Schools, a pledge drafted […]

Fla. Sen. Rick Scott: Accountability should be basic function of govt, but Dems and Biden failing to do so

The Internal Revenue Service (IRS) headquarters, in Washington, DC on January 10, 2023. – in one of its first legislative moves, House Republicans voted to rescind some $70 billion in funding for the IRS. (Photo […]