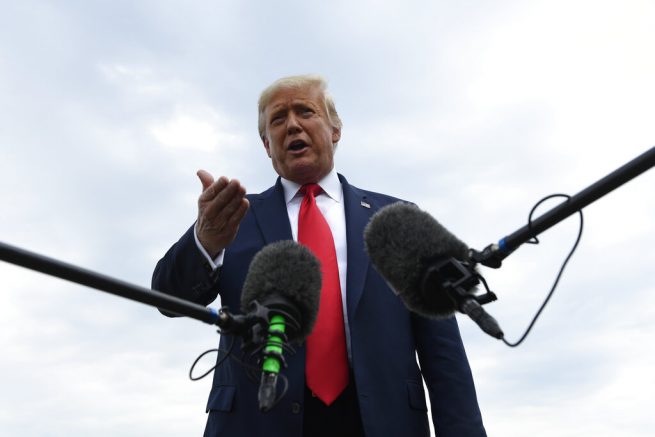 President Trump has vowed to trigger a “snapback” of sanctions included in the Iran nuclear deal. On Saturday, he announced he will unilaterally reinstate sanctions on Iran.

This came after the UN Security Council voted not to extend the Iranian nuclear deal on Friday.

According to the president, prolonging the embargo is essential to fighting terror.

“Iran wants me to lose so badly. …Iran is a whole different ball game right now. They haven’t been sponsoring terror because they don’t have very much money to sponsor terror, and they know. We just captured four Iranian ships, as you know.” – Donald Trump, 45th President of the United States

Israeli officials have voiced concern not extending the arms embargo could lead to further instability in the Middle East.

In the meantime, the UN Security Council is planning a summit of world leaders to discuss matters in Iran. President Trump has said he likely won’t take part until after the November election.

Andrew Wiggins #22 of the Golden State Warriors is guarded by Aaron Gordon #50 and Jamal Murray #27 of the Denver Nuggets at Chase Center on April 12, 2021 in San Francisco, California. (Photo by […]

New York Gov. Andrew Cuomo announced Wednesday a statewide curfew restricting food and beverage service in the state will end next month for both indoor and outdoor dining areas. The 12 a.m. curfew for outdoor […]

Oregano, a must have in the garden…and in the medicine cabinet

Ah oregano. No self respecting pizzeria is without a shaker full of it nearby. But the proverbial pizza topper has far more uses than spicing up one of America’s favorite foods. From curing athlete’s foot […]