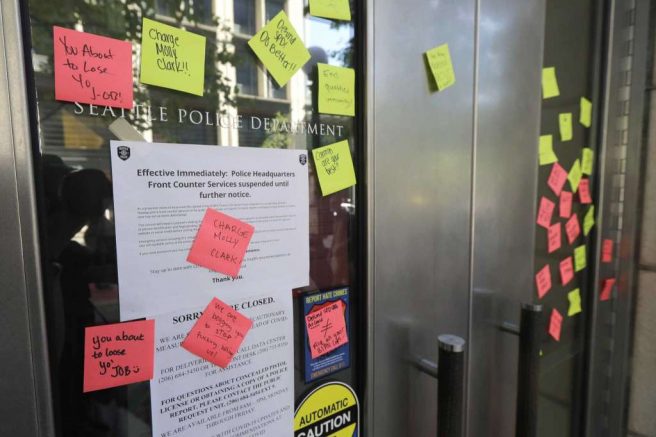 Adhesive notes are shown after they were left on the doors of Seattle Police Headquarters, Monday, July 13, 2020, following a news conference held by Mayor Jenny Durkan. (AP Photo/Ted S. Warren)

The Seattle City Council recently passed a series of amendments aimed at cutting the city’s police department budget. On Wednesday, the council voted to eliminate the homeless encampment navigation team and reduce the department’s sworn personnel.

39 other budget proposals are still awaiting a final vote. One policy would cut at least 100 officers.

However, both the city mayor and police chief have criticized the council’s rush to strip the department’s funding.

“There is a right way to right size policing, but anyone who thinks it can happen overnight really isn’t looking at the facts,” stated Jenny Durkan.

We know that reenvisioning community safety will include changes to the SPD budget. But the push from Council to do large-scale changes in ‘20 w/no practical plan for community safety is completely reckless. pic.twitter.com/EgYktVPp26

The final vote on the spending plan will take place next week.

President Biden getting ready to address Congress tonight. He’s expected to announce a new multi-trillion dollar package. What’s in it and how does he plan to pay for it? Boeing posts another quarterly loss, although […]