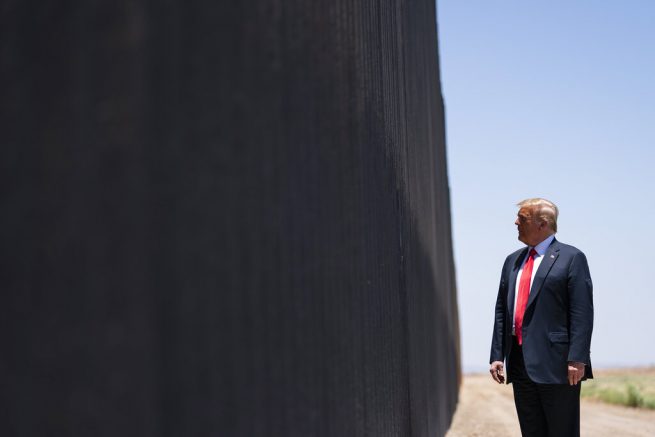 FILE – In this June 23, 2020, file photo, President Donald Trump tours a section of the border wall in San Luis, Ariz. A federal appeals court has ruled against the Trump administration in its transfer of military money to build sections of the U.S. border wall with Mexico. (AP Photo/Evan Vucci, File)

According to President Trump, the U.S.-Mexico border wall is making headway. On Monday, he tweeted that officials are seeing great numbers at the southern border while also touting the progress made on the wall’s completion. The president also warned that Democrats want open borders, which he said would be dangerous.

At the end of June, President Trump visited the border wall to celebrate 200-miles completed. He previously stated the majority of the wall would be finished by the end of the year.

Meanwhile, international students studying in the U.S. may have to leave the country in a new rule announced by U.S. Immigration and Customs Enforcement (ICE).

On Monday, ICE issued a statement informing students from other countries they have to leave the U.S. if their classes are completely online. The rule states that if they do not leave the country then they could be deported.

This comes as several universities are conducting their curriculum remotely in response to the coronavirus pandemic. Students will be allowed to stay in the country if part of their coursework is carried out in person or if they transfer to in-person institutions.

A Critical Tool for Advancing and Defending International Religious Freedom

Commentary The United States recognizes religious freedom as an unalienable right and is committed to its advancement and protection for all. As the world’s leading defender of the right to worship freely, the United States […]

At least 6 injured in fire at Wis. construction facility

This May 5, 2022 photo provided by the in the Sparta Area Fire District in Wisconsin shows a house fire that killed four people in Little Falls, Wis. Authorities say four people have died in […]

More Canadians Hospitalized Over Substance Use Since Start of Pandemic: Study

Thousands more Canadians received substance-related hospital care during the COVID-19 pandemic than in the previous year, disproportionately effecting men and people from lower-income neighbourhoods, a study revealed. In the first 7 months (from March to […]