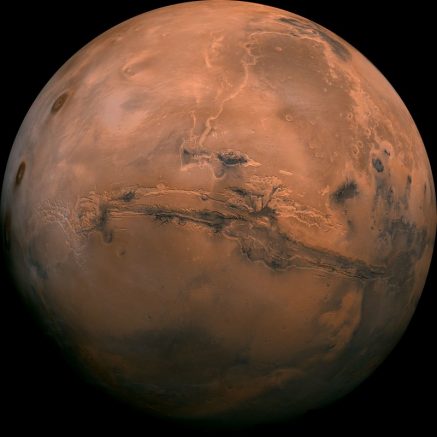 FILE – This image made available by NASA shows the planet Mars. This composite photo was created from over 100 images of Mars taken by Viking Orbiters in the 1970s. (NASA via AP Photo)

The United Arab Emirates is set to launch its first spacecraft  to Mars this month, six years after first being announced. The unmanned mission named al-Amal, which is Arabic for “hope,” will give scientists the opportunity to have a better understanding of Martian atmosphere.

It will be the first unmanned probe able to provide a clear image of the planet’s atmosphere and it’s layers. The probe will also answer a number of questions about the red planets loss of hydrogen and oxygen levels over the span of one Martian year — equivalent to 687 Earth days.

“Being able to put together the data of the Emirates’ Mars mission, together with data that has been collected about Mars throughout the years that humanity has been studying Mars, will allow us to get the full picture of the evolution of the Martian atmosphere,” stated Sarah Amiri, the science lead for the Emirates Mars Mission.

The spacecraft will be traveling more than 75,000 miles per hour and will have to slow down to around 11,000 miles an hour in order to join the planet’s orbit. Officials said the mission will take several months as “Hope” isn’t expected to arrive into Mars’ orbit until late 2021.

“We want to better understand how a planet that is sort of similar to ours has evolved throughout millions of years and how has it gotten to the stage that it’s at today,” Amiri explained.

If the mission is deemed successful, the Arab nation will join the U.S., the Soviet Union, the European Space Agency and India in successfully sending a spacecraft into Mars’ orbit. The mission is set to launch in Japan during a window opening July 14.

Police across the nation under attack amid unrest

FILE – In this Sunday, May 31, 2020 file photo, police form a line on H Street as demonstrators gather to protest the death of George Floyd near the White House in Washington. (AP Photo/Alex […]

White House claims President Trump has yet to endorse vaccines