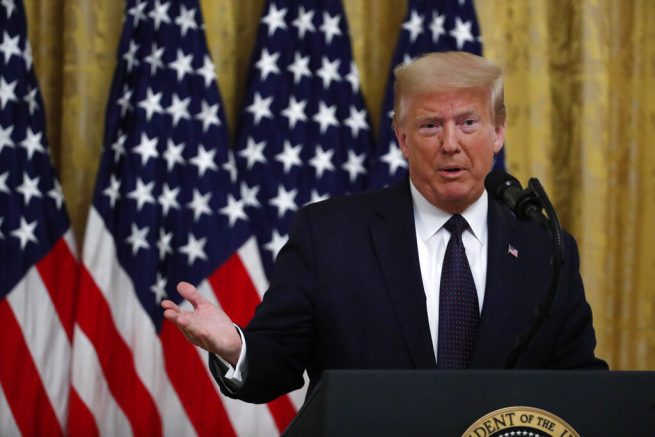 President Donald Trump speaks about the PREVENTS “President’s Roadmap to Empower Veterans and End a National Tragedy of Suicide,” task force, in the East Room of the White House, Wednesday, June 17, 2020, in Washington. (AP Photo/Alex Brandon)

The Trump administration has taken new steps to address veteran suicides in the United States. On Wednesday, the president unveiled the PREVENTS Act, which was designed to provide mental health assistance to those in need.

President @realDonaldTrump is unveiling a roadmap to address an urgent struggle: the crisis of veteran suicide. pic.twitter.com/sQsmSOL7Bo

PREVENTS stands for the ‘President’s Roadmap to Empower Veterans and End a National Tragedy of Suicide.’ It will focus on preventing suicide among not just veterans, but all Americans.

Part of the initiative included firearm safety, wellness programs at workplaces and new barriers near railroads and bridges.

The president also pointed out the inefficiencies of handling veteran suicides during the Obama administration. He said this time around, American vets will receive the highest standard of care.

“We have fundamentally reorganized the VA from top to bottom and we’ve reestablished a crucial principle,” said President Trump. “American veterans deserve the highest standard of care anywhere in the world, and that’s what they’re getting.”

After years of scandal and neglect, the Trump Administration has reorganized the Department of Veterans Affairs around the principle that our veterans deserve the highest standard of care. pic.twitter.com/XCHhEmfVXa

The White House has secured $9.6 billion in funding for mental health services, which include same day emergency health. President Trump also touted the expansion of the telehealth program, which he said will allow “people to consult with doctors from the comfort of their homes.”

U.S. regulators on Monday expanded the use of Pfizer’s COVID-19 vaccine to children as young as 12. Shots could begin as soon as a federal vaccine advisory committee issues recommendations for using the two-dose vaccine […]