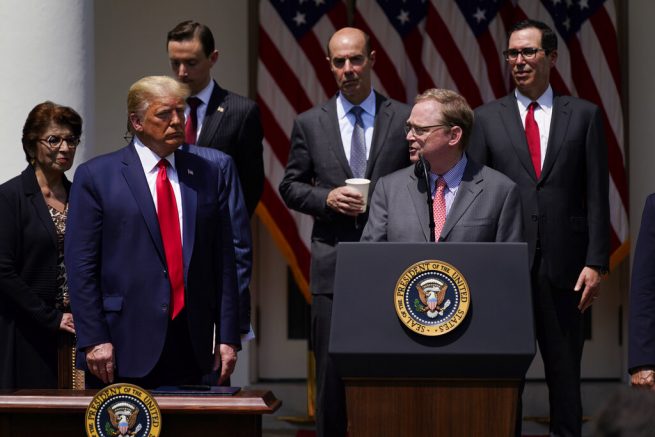 White House senior adviser Kevin Hassett speaks as President Donald Trump and others listen during a news conference in the Rose Garden of the White House, Friday, June 5, 2020, in Washington. (AP Photo/Evan Vucci)

According to the president’s senior economic adviser Kevin Hassett, consumer spending is ready to bounce back in the United States. On Wednesday, Hassett announced spending trends are quickly returning to where they were before the pandemic.

He noted the economy is showing signs of slow recovery, even though the stock market fell sharply last week.

The adviser claimed Americans are eager to spend again, as shutdowns have allowed them to save money.

“The spending is getting back to where it was fairly quickly,” said Hassett. “I would expect by the time we see the June numbers, we’ll have basically a return to the spending that we had at least a year ago.”

He went on to say the president supports another round of stimulus checks and a payroll tax reduction to help boost the economy.

Commentary In the past year, various potential risks of economic globalization have gradually surfaced. A series of events raised the alarm, including the COVID-19 pandemic, the U.S.-China cold war, the global chip shortage crisis, skyrocketing shipping […]