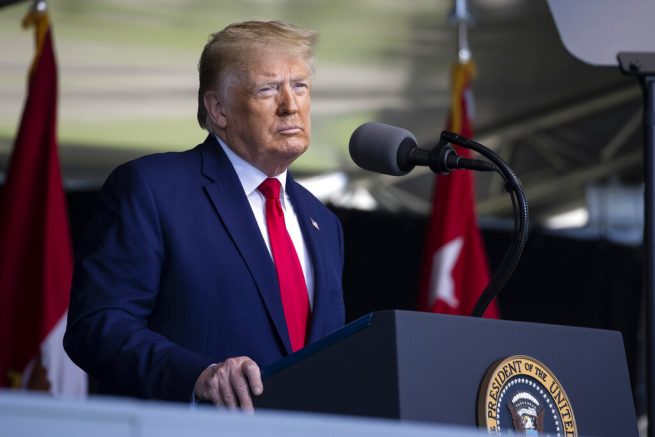 President Donald Trump pauses while speaking to over 1,110 cadets in the Class of 2020 at a commencement ceremony on the parade field, at the United States Military Academy in West Point, N.Y., Saturday, June 13, 2020. (AP Photo/Alex Brandon)

The president addressed the 2020 graduating class of West Point Military Academy on Saturday. He said these cadets will go on to be respected across the world.

Congratulations to #USMA2020! Good luck on your future endeavors as leaders of character. #LongGrayLine #WithVisionWeLead#CallToServe pic.twitter.com/usnuqQPJkR

During his commencement speech to the 1,107 cadets in New York, President Trump highlighted the distinguished alumni the graduation class was about to join.

He thanked the cadets for choosing to devote their lives to the defense of America and expressed his gratitude towards those currently serving, especially those in our National Guard.

“I also want to thank the men and women of our National Guard, who respond with precision to so many recent challenges, from hurricanes and natural disasters to ensuring peace, safety, and the constitutional rule of law on our streets,” stated the president.

Additionally, President Trump used his power as commander in chief to waive any lingering academic restrictions that would have prevented any of the cadets from graduating.

He concluded by saying America will always prevail and that nothing will stop the West Point Class of 2020.

TOPSHOT – Joe Biden sat in the Oval Office as he signed a series of orders at the White House in Washington, D.C. (Photo by JIM WATSON/AFP via Getty Images) OAN NewsroomUPDATED  10:40 AM PT […]