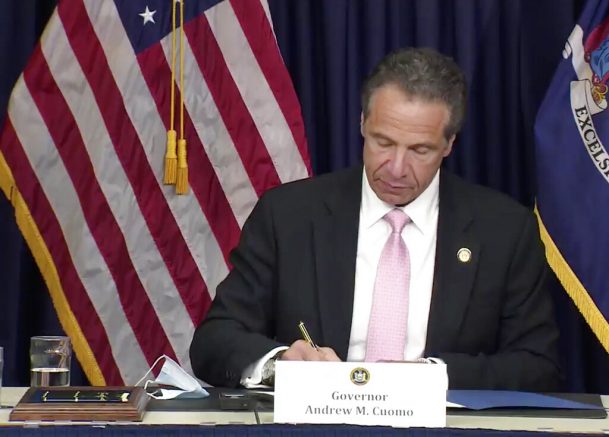 New York Governor Andrew Cuomo has threatened legislative action in hopes of forcing local governments to take action to reform their police departments. On Friday, Cuomo announced he would sign an executive order mandating municipalities “reinvent and modernize” their departments by the end of April 2021.

Failure to do so would make these local governments ineligible for state funding. Around 500 police departments will likely be affected.

Honored @TheRevAl could be with us on this historic day.

We signed into law landmark police reform and created a new system by Executive Order requiring local police to reform & modernize with input from the communities they serve.

And we made it clear: No reform – No funding. pic.twitter.com/FGW09P8jzu

According to the governor, linking funds to “systemic reform” is the only way to achieve dramatic results.

“There is no trust, there is a breach of the trust, and that has to be restored and repaired,” he stated. “The only way to do it is to get in a room, get to the table, let everyone say their piece and figure it out community by community, all across this state.”

I just signed into law nation-leading legislation that:

There is more to do & NY will lead the way. pic.twitter.com/i4MUKe37IY

Cuomo also signed a bill earlier in the day, which repealed a decades-old law shielding a police officer’s disciplinary record from the public.

Commentary Because former Attorney General William Barr failed to hold anyone accountable for the Democratic Party and FBI’s dirty tricks campaign against Donald Trump, Russiagate lives on. Indeed, recent news reports show that it has […]

The Senate will vote on a bill that would dramatically change how elections are run next month, the body’s top Democrat said Friday. S. 1, also known as the For the People Act, will be […]

With Parties Polarized, Desire for Revenge Calls the Tune

“The people have spoken,” said former New York City mayor Ed Koch after the Democratic mayoral primary of 1989, “and they must be punished.” The understandably bitter Koch had just been defeated by David Dinkins […]