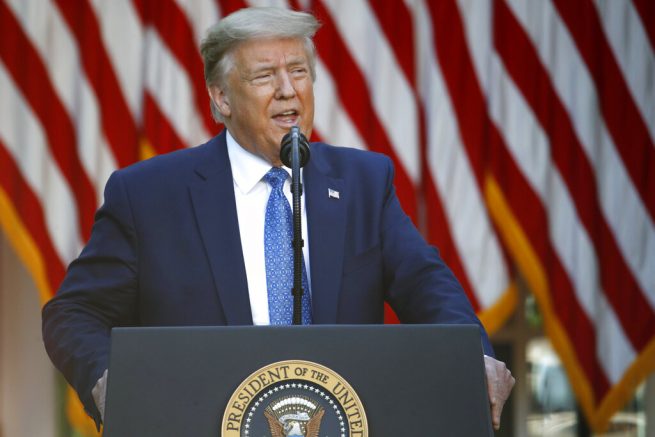 In a series of tweets Tuesday, the president announced he will move the RNC out of Charlotte, North Carolina after the GOP and Gov. Roy Cooper (D) failed to come to an agreement regarding coronavirus-related restrictions.

…millions of dollars, and jobs, for the State. Because of @NC_Governor, we are now forced to seek another State to host the 2020 Republican National Convention.

The announcement comes as Republican officials and Gov. Cooper have been holding talks for the last few weeks over whether the event could take place without limits on crowd size and requirements that attendees wear masks.

However, the president said Cooper is “still in shelter-in-place mode” and is refusing to allow Republicans to occupy the Spectrum Arena as originally anticipated and promised. The event would have brought in millions of dollars as well as jobs.

In a letter to Republican National Committee leaders Tuesday, Gov. Cooper, once again, advised the party to plan a smaller event with fewer people, social distancing and face coverings.

According to convention organizers, they want at least 19,000 delegates, staff, volunteers and elected officials to attend on top of the thousands of actual guests. As White House press secretary Kayleigh McEnany has said, the president is confident the event will go on as planned.

This comes as several other governors have showed interest in holding the event in their states, including Florida Gov. Ron DeSantis and Georgia’s Brian Kemp.

“Florida would love to have the RNC, heck I’m a Republican, it would be good for us…in terms of the economic impact when you talk about major events like that,” said DeSantis. “…I feel like we could do that in a safe way…its not till August…we’d have plenty of time to prepare for that.”

While it remains unclear exactly where this year’s convention will be held, the event is still scheduled to take place from August 24 through the 27.

An investigator works on the scene, following several accidents on the city motorway A100 in Berlin, Germany, Wednesday, Aug. 19, 2020. According to German news agency dpa, prosecutors say a series of crashes caused by […]

Sen. Pat Toomey, R-Pa., leaves the chamber after taking an oath and voting on how to proceed on the impeachment against President Donald Trump, at the Capitol in Washington, Tuesday, Jan. 26, 2021. (AP Photo/J. […]