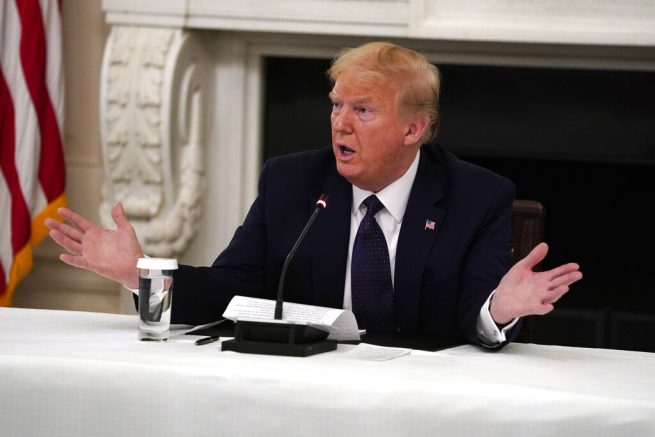 FILE – In this May 18, 2020 file photo, President Donald Trump tells reporters that he is taking zinc and hydroxychloroquine during a meeting with restaurant industry executives about the coronavirus response, in the State Dining Room of the White House in Washington. (AP Photo/Evan Vucci)

The president has defended inviting Russia to rejoin the G7 summit this year. On Wednesday, President Trump stated it is common sense to bring Russia’s President Vladimir Putin back into the fold and noted it would be easier to solve issues involving Russia with Putin in the room.

He went on to discuss Russia’s recent cooperation during the pandemic, as well as the potential opportunity to discuss a new nuclear pact.

“The problem is many of the things that we talk about are about Putin, so we’re just sitting around wasting time. Then you have to finish your meeting and somebody has to call Putin, or deal with Putin, on different things. I say have him in the room. It used to be the G8…” – Donald Trump, 45th President of the United States

Russia was removed from the group in 2014 following Moscow’s annexation of Crimea. President Trump previously claimed former President Barack Obama may have played a role in this.

Other G7 nations, including Canada and Germany, have criticized the president’s decision. Additionally, the U.K. has vowed to veto any attempt to bring Russia back into the group.

Trump supporters in Israel participate in car convoy to Jerusalem

PARIS—France may introduce stricter coronavirus restrictions for British visitors when tourism reopens this summer to prevent the spread of a virus variant first detected in India and causing concern in Britain, authorities said Sunday. The […]