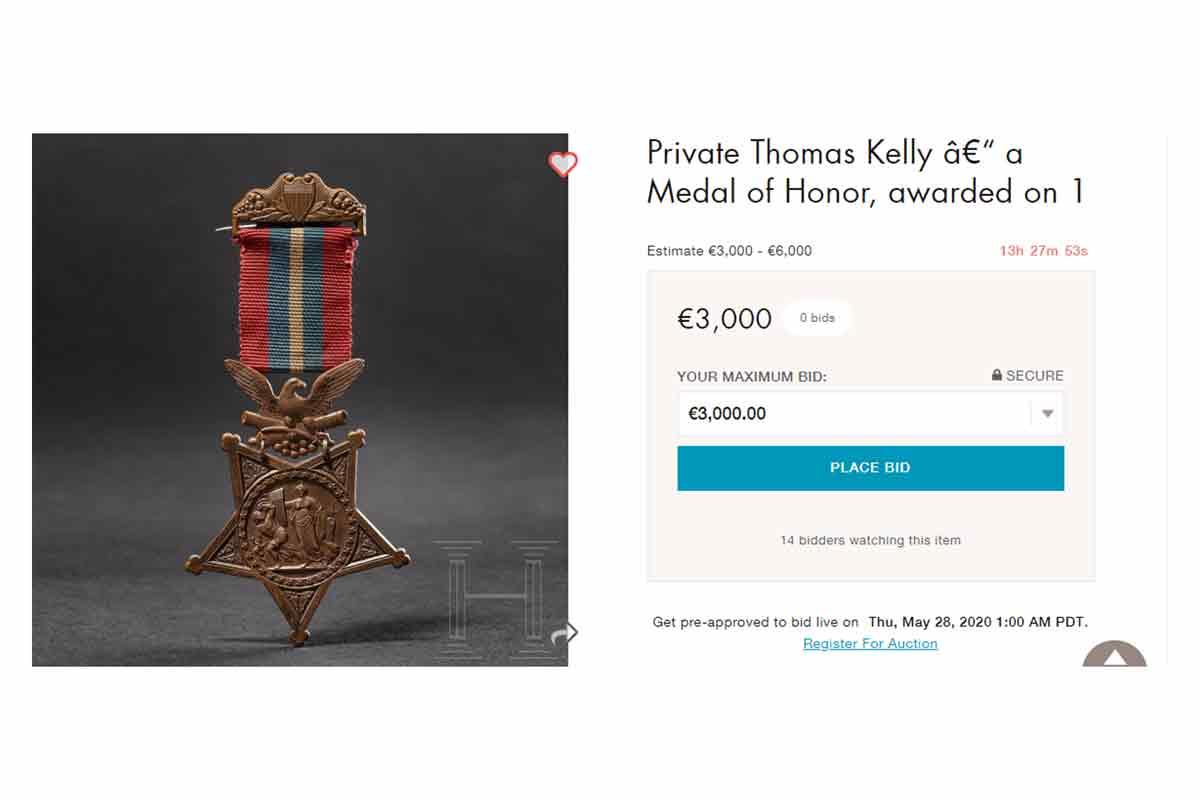 A Medal of Honor awarded to a U.S. Army private for a heroic rescue during the Spanish-American War will be auctioned off this week in Germany — if, that is, steps are not taken to halt the sale.

The medal, awarded to Pvt. Thomas Kelly on June 22, 1899, is being presented for public consideration Friday by auction house Hermann Historica GmbH in Munich, Germany, with an opening bid of 3,000 euros. But Sen. Ted Cruz, a Texas Republican, is calling on Secretary of State Mike Pompeo to use his influence to stop the sale.

“The sale harms the dignity and honor of all recipients of the Medal of Honor,” Cruz wrote in his letter, dated Tuesday. “The Congress and the United States have long sought to prevent such affronts, and indeed 18 U.S. Code § 704 authorizes fines and imprisonment when those sales occur within our jurisdiction. In this context, I urgently call on you to work with the U.S.’s foreign partners, including with officials of the Federal Republic of Germany, to ensure the sale is suspended.”

The law cited by Cruz makes it a crime to wear, make or sell any military decoration or medal authorized by Congress outside of the prescribed manner. But misuse of the Medal of Honor, the military’s most prestigious decoration for battlefield heroism, comes with especially severe penalties. Violators can be punished with up to one year in prison, and even barter or exchange for the Medal of Honor is prohibited by law.

It’s not clear how Hermann Historica GmbH came into possession of Kelly’s medal.

A State Department official told Military.com the department does not comment on congressional correspondence. Cruz’s office and the auction house did not immediately respond to Military.com queries.

Kelly was born in Ireland on an unknown date and died Dec. 17, 1920. While deployed to Santiago, Cuba, with Company H, 21st U.S. Infantry, on July 1, 1898, he “gallantly assisted with the rescue of the wounded from in front of the lines and while under heavy fire from the enemy,” according to his medal citation.

On the auction site, Kelly’s medal is lot 5099, one of many historic military medals and ribbons spanning various nations and conflicts that will be sold.

“The five-rayed star (Army, first model) embossed in copper and bronzed, standing upright on one tip, bearing the engraver’s signature ‘Paquet F,'” the auction description of the Medal of Honor reads. “The eagle riband buckle fastened with rings and the suspension bar with a safety pin, both also embossed in bronzed copper. On the original ribbon in the design issued between 1896 and 1903. The dedication ‘The Congress to Private Thomas Kelly – Co. H 21st U.S. Infty., for gallantry in action at Santiago, Cuba, July 1, 1898’ inscribed on the back.”

Other groups are also joining the call to save Kelly’s medal.

“This Medal of Honor is a priceless American treasure that belongs here in our country,” said Medal of Honor Museum President and CEO Joe Daniels in a statement. “We’re asking our elected leaders and officials in the administration to do what they can to prevent people from illegally profiting off of Private Kelly’s heroism and bring the medal home where it belongs.”

Some 3,525 Medals of Honor have been awarded to 3,506 individuals since the award was created during the Civil War. There are few stories of medals going missing, and when they do, they’re difficult to replace. When World War I soldier Albert Baesel’s medal went missing in the 1980s, the Army refused to replace it until 2019.

Death Toll from Attack on Kabul Maternity Clinic Rises to 24

KABUL, Afghanistan — Officials on Wednesday raised the death toll from a militant attack on a maternity hospital in Kabul to 24, including mothers, nurses and two babies. A day after the shooting rampage, 20 […]

BAGHDAD — Three Katyusha rockets struck near the military sector of the Baghdad airport early on Wednesday but caused no casualties, the Iraqi military said. The attack came hours ahead of a parliament session that […]