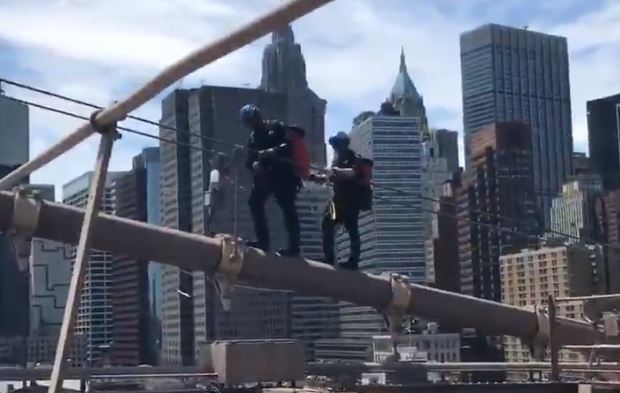 New York City police talked a man down after he threatened to jump off the Brooklyn Bridge. The incident happened early Friday morning after members of the NYPD Emergency Service Unit climbed the Manhattan tower of the bridge amid reports of a man on top of the tower.

#HappeningNow
A despondent male has scaled the Brooklyn Bridge and is threatening to jump. #ESU is actively gearing up to rescue the male. #Aviation & #Harbor are providing aerial surveillance and waterside security pic.twitter.com/3hcKGuB4zw

Negotiators talked to the man for around three hours before finally bringing him to safety.

Before agreeing to come down, the man reportedly asked police for cigarettes.

“Like in the movies, this is a negotiation and there’s a give-and-take,” explained Lieutenant Michael Licitra. “We wanted him off the edge, and we were able to do that by giving him a cigarette.”

The bridge was closed to traffic until the early evening, when the man was finally brought to safety.

Every day, NYPD officers put their lives on the line to protect New Yorkers.

Yesterday— without hesitation, our @NYPDSpecialops officers climbed the Brooklyn Bridge to help save a despondent man from jumping.

Their heroic efforts helped save a life and prevented a tragedy. pic.twitter.com/uU94KEYmne

According to authorities, the man was taken to a hospital for psychiatric evaluation.

MIAMI GARDENS, FLORIDA – JANUARY 06: Florida Gov. Ron DeSantis speaks during a press conference about the opening of a COVID-19 vaccination site at the Hard Rock Stadium on January 06, 2021 in Miami Gardens, […]

No. 10 Announces Inquiry Into Leak of Texts Between PM and Dyson

No. 10 Downing Street on Thursday announced an inquiry into the leak of Prime Minister Boris Johnson’s texts that led to accusations of preferential treatment. According to the BBC, in a text exchange last March, Johnson […]

Reports: 2020 to be one of the most litigated elections in history

Election signs are stored at State Farm Arena, home of the NBA’s Atlanta Hawks basketball team, Friday, July 17, 2020, in Atlanta. The 16,888-seat facility will be used as a poll location for the upcoming […]