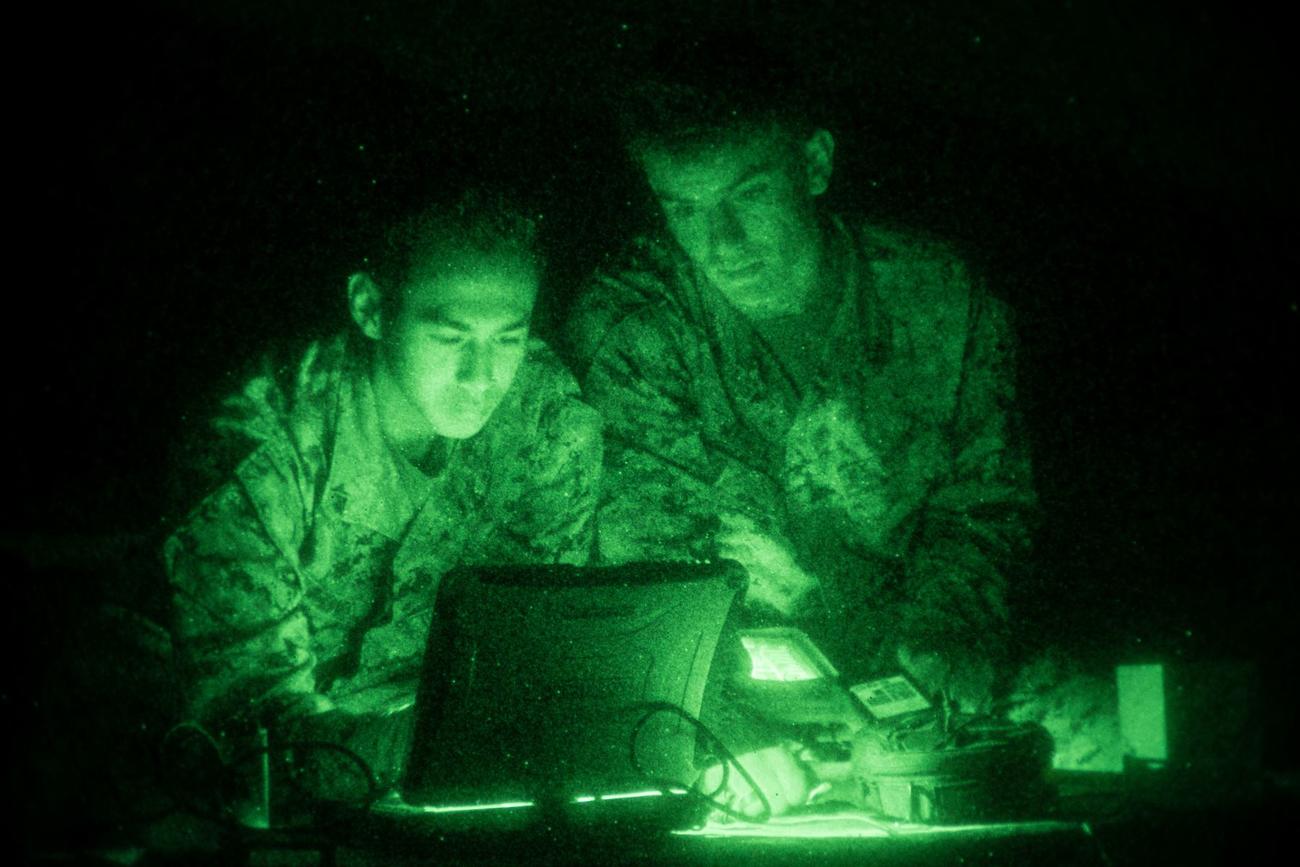 It was 4:30 a.m. and Marine Sgt. Austin Olmos was high up on Camp Pendelton’s Horno Ridge on an intelligence training mission.

The objective was complex: Selecting the right drone for the challenging environment to find an evasive target in an unknown rugged territory. In combat, intelligence Marines such as Olmos typically provide reconnaissance for missions and tactical surveillance for units on the ground.

Olmos launched the drone and flew a boxed and circular search pattern over a center point. Within minutes, the Marine located the first hot object using the infra-red heat sensors aboard the system.

But in this case, it wasn’t a role player hiding and pretending to be an adversary to give reality to a training exercise; it was a herd of mule deer that needed counting.

“There are a lot of capabilities military drones have built-in that help us with our deer survey,” Michael Tucker, the base’s chief game warden, said.

Recently, Tucker and his team six received the Secretary of the Navy’s Natural Resources Conservation Team of the Year award for the program. The award is the team’s first win for deer management.

“It’s a great validation for our team,” Tucker said. “There was a lot of fieldwork that included hundreds of hours of research. This award shows it’s worth it.”

For the recent training exercise, Olmos, with help from Lance Cpl. Tristan Hayden, first planned to launch a Puma fixed-wing military drone, but the wind over the ridge made it difficult. So, they opted for a Skyranger, a helicopter-type flying system that can be more precise and handle the wind.

“Traditionally, while training on base we’re restricted to working in training areas. Here we didn’t know where the deer would be,” said Capt. Jason Levine, a battalion intelligence officer with the 3rd Battalion, 1st Marines who oversaw the training. “It was great to get out there and do something more realistic.”

After a series of additional flights, the Marines counted 12 deer.

“The game warden was happy with the count,” said Levine. “He wanted to prove a concept that was safer and easier. For us, it allowed the Marines to interact with a group they normally wouldn’t and it allowed for training expertise.

“We’re appreciative of the land we’re able to use here,” he said, “and this way we’re kind of paying it back.”

Deer on the Base

The deer population at the sprawling 220-square-mile seaside base now is estimated at 500.

Though not considered endangered, the population on the base — as with other areas of the Western U.S. — had been declining as drought conditions lingered — the last two rainy years have helped bring them back.

The rains have also contributed to the size of the animals — bucks are typically about 150 pounds and does weigh 100 pounds.

“One year we saw does go up 16%,” Tucker said. “The antler size also increases.”

There is little development, and impacts from military training missions are less of a threat to the herds than urban sprawl. Explosions and munitions fire occurs only in a small part of the base and typically in flat grasslands.

“Most of the base has buffer sections,” Tucker said. “Non-live fire training doesn’t negatively affect the deer. Convoys of military vehicles are much less hazardous than a personally owned vehicle.

“Those cars, when they travel 50 mph, lead to more roadkill than slower-moving military vehicles,” he said. “The best area, if I were a deer, would be a large area of intact habitat.”

While there are populations all over Camp Pendleton, most roam the wooded, hilly areas that stretch along the 5 freeway off Cristinanitos and Las Pulgas roads in the western third of the base.

Before using the military drones, helicopter pilots had to fly dangerously close to the ground and land obstacles. In addition to the inherent hazards, using helicopters was more expensive.

“The leading cause of death for wildlife biologists is low-elevation helicopter surveys,” Tucker said.

The drones the military use can stay in the air for hours longer than commercially-available options, he said. “The cameras can tell you exactly where the deer is because they’re used to locate targets. It’s also helpful, so you don’t double-count once you’ve determined where you’ve flown.”

Tucker came up with the idea to get the Marines involved and posted it on a base Facebook page. A Marine friend who hunts told Levine about the post, and Levine contacted Tucker.

“When I saw this, I thought, what a great opportunity,'” Levine said. “The Marines are used to repetitive scenarios and searching for another Marine. They had no idea what they would see or if they would even find something.”

These missions are also teaching Tucker new ways of looking at wildlife management.

“Marines use these drones for convoy security,” he said. “They suggested we use if for deer surveys.”

Typically, a field researcher stays in a fixed location for a survey; with the Marines’ idea, Tucker and other researchers can get into a vehicle and cover a larger area while using the drones overhead.

“We can take a military tactic to survey wildlife,” he said. “As a wildlife manager, I would never have thought of that.”

Once the count of deer is known, base wardens use deer hunting as a management tool. Hunting is open on to Marines, veterans and Department of Defense civilian employees.

“The habitat can only feed a certain amount of deer,” Tucker said. “To avoid a starvation event, we attempt to harvest about 20% of the deer herd each year. This will prevent rapid herd growth that will create an imbalance in the food web.”

“Hunting is a great tool to maintain the balance if managed properly,” Tucker said. “People have been hunting deer on the land we call Camp Pendleton for thousands of years.

Game wardens take DNA from each dead deer. Researchers study the samples as part of a regional study exploring how Camp Pendleton’s deer are related to those nearby.

From that information, researchers learn how deer cross barriers such as roadways and urban development.

“It will help local governments plan for developments with wildlife in mind,” he said. “The research can help planners build in wildlife corridors. The base deer population is well-connected to the Cleveland National Forest.”

This article is written by Erika I. Ritchie from Orange County Register and was legally licensed via the Tribune Content Agency through the NewsCred publisher network. Please direct all licensing questions to legal@newscred.com.

© Copyright 2020 Orange County Register. All rights reserved. This material may not be published, broadcast, rewritten or redistributed.

CHARLOTTESVILLE, Va. (AP) — All he wanted was a little COVID-19 distraction, but the century-old photo of a military chaplain took an Albemarle County man on a 102-year time trip to a different state during […]