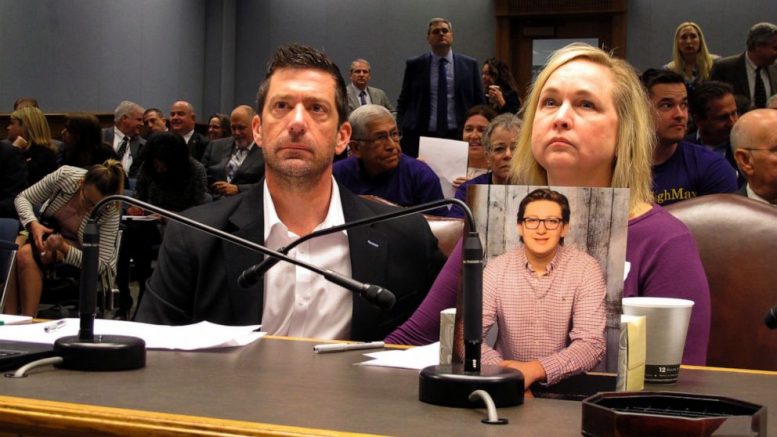 In this March 21, 2018 file photo, Stephen and Rae Ann Gruver sit in a House committee room behind a photo of their son, 18-year-old Maxwell Gruver, a Louisiana State University freshman who died with a blood-alcohol content six times higher than the legal limit for driving in what authorities say was a hazing incident, in Baton Rouge, La. (AP Photo/Melinda Deslatte)

A sexual discrimination lawsuit against Louisiana State University is moving forward after being approved by a federal appeals court. The decision was made earlier this week by the Fifth Circuit Court.

Judges ruled the university is not immune to litigation as college officials have argued. Moving forward, the $25 million complaint will be the first of its kind to examine how a college disciplines its fraternities and sororities.

This came after 18-year-old Max Gruver died of alcohol poisoning during a hazing event back in 2017. His parents have argued this could have been prevented had officials regulated fraternities the same way they do sororities.

House Bill 978 has been introduced onto the House floor. The bill would increase the penalties for hazing. To read HB 978, visit https://t.co/r2IdYBq4sv. #msleg

The Gruver parents have argued officials at Louisiana State University were “deliberately indifferent” to fraternity hazing rituals leading up to their son’s death.

Macron vows to crack down on child sexual violence

The nine campuses of the University of California system will no longer consider standardized testing scores as part of the admission process beginning in the fall of 2021. The change is the result of a […]

A convoy of Russian armored vehicles moves along a highway in Crimea, Tuesday, Jan. 18, 2022. Russia has concentrated an estimated 100,000 troops with tanks and other heavy weapons near Ukraine in what the West […]