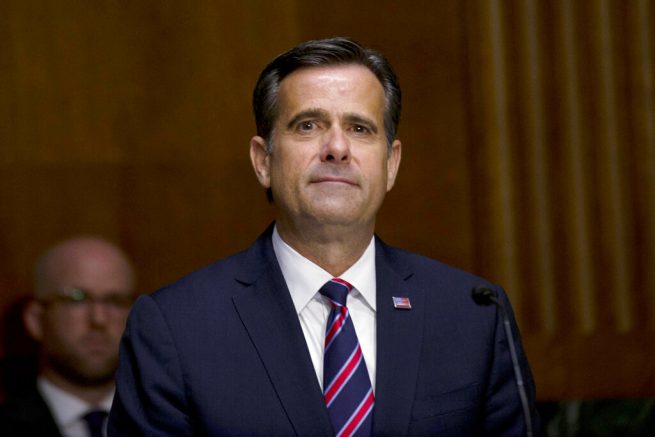 Director of National Intelligence nominee John Ratcliffe recently outlined how he would approach the role if confirmed, while appearing before the Senate Intelligence Committee.

During his confirmation hearing Tuesday, Ratcliffe told lawmakers the intelligence he would provide to them as DNI will not be impacted or altered by outside influence.

The Texas representative also vowed his actions as national intelligence chief would always reflect his commitment to the constitution and rule of law.

“Let me be very clear, regardless of what anyone wants our intelligence to reflect, the intelligence I will provide, if confirmed, will not be impacted or altered as a result of outside influence.”pic.twitter.com/BB8OP5pId8

Ratcliffe said the immediate focus of the Intelligence Community must be on the geopolitical and economic impact of the coronavirus pandemic and it’s origins. He also detailed how he views the position of DNI.

“I see the Director of National Intelligence as more than just a leader, a manager, an integrater,” he explained. “The DNI must at all times be an arrow catcher, a problem solver, an obstacle remover for the IC…addressing issues, resolving conflicts, and putting tools and resources in the right place at the right time.”

He continued saying, “the DNI must be the voice to advocate for and defend the interests of the IC and its people.” If confirmed, Ratcliffe would replace acting DNI Richard Grenell who is also the U.S. ambassador to Germany.

Given the iconic status and popularity of Apple’s iPhones, there’s something of which all consumers should be aware. iPhone radiation, especially in newer models, is the highest among all smartphones—just barely under the legal limit. […]