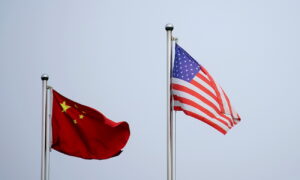 WASHINGTON—The U.S. Senate on Thursday advanced a sweeping package of legislation intended to boost the country’s ability to compete with Chinese technology, as Congress increasingly seeks to take a tough line against Beijing.

Senators voted 68-30 to end debate on the $250 billion U.S. Innovation and Competition Act of 2021, or USICA, and move nearer to a final vote on the legislation.

The desire for a hard line in dealings with China is one of the few truly bipartisan sentiments in the deeply divided U.S. Congress, which is narrowly controlled by President Joe Biden’s fellow Democrats.

Senate Democratic Majority Leader Chuck Schumer, who co-wrote the USICA legislation, said the United States spends less than 1 percent of gross domestic product on basic scientific research, less than half of what China does.

“We have put ourselves in a very precarious position of potentially falling behind the rest of the world in the technologies and industries that will define the next century,” he said in Senate remarks urging support for the bill.

The Chinese embassy in Washington did not immediately respond to a request for comment on the legislation.

The exact timing of a final Senate vote was not clear, as lawmakers continued to debate next steps behind closed doors on Thursday evening.

Once it passes the Senate, the bill must also pass the House of Representatives to be sent to the White House for Biden to sign into law.

The measure authorizes about $190 billion for provisions to strengthen U.S. technology in general, plus $54 billion specifically to increase production of semiconductors, microchips and telecommunication equipment.

The legislation also seeks to counter Beijing’s growing global influence through diplomacy, by working with allies and increasing U.S. involvement in international organizations after former Republican President Donald Trump pulled Washington out as part of his “America First” agenda.

As it considered the legislation, the Senate approved by 91-4 an amendment backed by Republican Senator Mike Crapo and Democratic Senator Ron Wyden to retaliate against what they consider China’s anti-competitive trade practices and bar products determined to have been produced using forced labor.

By Patricia Zengerle and David Shepardson

Canadian diplomats receiving anti-racist training courses are now using materials that draw on a Marxist-based social theory, teaching them that “objectivity,” “sense of urgency,” and “paternalism” are all characteristics of “white supremacy.” Through an access […]

Sweet garden peas always make me smile. There is something about their prettiness and sweetness that is just so charming. Also known as English peas or shelling peas, they are great for all sorts of […]