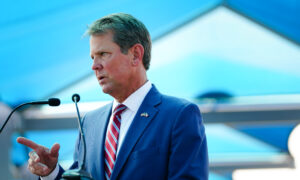 The order (pdf), in effect from May 31 through June 15, says that schools and school districts cannot use public health state of emergency powers to compel staff or students to wear masks while on campus.

“As hospitalizations, cases, deaths, and percent positive tests all continue to decline—and with vaccinations on the rise—Georgians deserve to fully return to normal,” Kemp said in a statement. “With safe and effective vaccines widely available and the public well-aware of all COVID-19 mitigation measures, mandates from state and local governments are no longer needed,” he added.

The move comes days after Kemp told Fox News in an interview that, “The time for mandates is over. Our numbers have plummeted,” adding, “we’re not going to have a mask mandate for our kids.”

Kemp’s decision drew backlash from some Democrats and school officials.

“Local school districts know better than Brian Kemp does, and his directive hampers their ability to make the best decisions for their schools, educators, and students,” Jason Esteves, who chairs the Atlanta Public Schools board, told the Atlanta Journal-Constitution.

“This is nothing more than a political stunt at a time when Georgians deserve real leadership to help us emerge from the pandemic,” said Esteves, who is also a member of the Democratic Party of Georgia.

Local governments in counties reaching the threshold requirement of 100 or more positive cases per 100,000 people over the previous 14 days may impose a “Local Option Face Covering Requirement” although they are not required to do so, according to the order.

However, local governments that do choose to implement local masking requirements may not levy fines greater than $50 for violations, and they must first warn non-compliant individuals before issuing any citations.

At the same time, local governments may continue to impose mask mandates on property owned or leased by them, regardless of whether the threshold requirement is met. The only exception is that no individual may be denied access to a polling location for failure to wear a mask.

The European Commission has parked efforts to ratify a controversial investment deal with China, after tit-for-tat sanctions imposed over human rights abuses in the Xinjiang region, the EU’s top trade official said on May 4. […]

‘I Love Hong Kong But Had to Leave’

China in Focus (April 20): Asylum Seeker: ‘I Love Hong Kong But Had to Leave’ A Hong Kong family seeks asylum in the United States. The longing for freedom pushed them to flee their home […]

No Mask Requirement at Summer Camps If Everyone Is Fully-Vaccinated: CDC