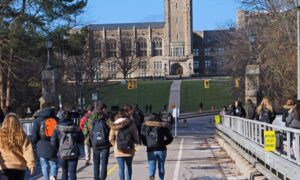 Lisa Keogh, a law student at Abertay University in Dundee, Scotland, was attending an online class when she was asked to express her opinion. The question was, what is a woman? In a BBC interview on May 18, Keogh said that because of her answer—that women have female reproductive organs—the university is investigating her for discrimination. Depending upon the outcome, she may face disciplinary action.

In a study released in March, Eric Kaufmann, a politics professor at the University of London, quantified the intolerance. The academy, of course, overwhelmingly leans to the left. In some departments, the ideological spectrum spans from moderately progressive to over-the-cliff neo-Marxist critical race theorist.

Kaufmann surveyed thousands of academics across North America and Britain and found that a significant proportion discriminate against conservatives in hiring, promotion, grants, and publications. Well over half of the relatively few right-leaning academics perceived a hostile work environment and acknowledged self-censoring in research and teaching. Particularly in social sciences and humanities, where “political views are manifest in people’s work and there is a lopsided political skew,” Kaufmann wrote, “the result is a discriminatory effect against conservatives and other intellectual minorities.”

Universities once imagined that they were engaged in a search for truth. Variety in ideological and philosophical perspectives is essential to that mission. Discovery is possible when it is safe to question orthodoxy in an environment of open inquiry. Setting competing views against each other generates ideas and exposes errors.

One of John Stuart Mill’s most revered passages reads, “He who knows only his own side of the case knows little of that. His reasons may be good, and no one may have been able to refute them. But if he is equally unable to refute the reasons on the opposite side, if he does not so much as know what they are, he has no ground for preferring either opinion… Nor is it enough that he should hear the opinions of adversaries from his own teachers, presented as they state them, and accompanied by what they offer as refutations. He must be able to hear them from persons who actually believe them … he must know them in their most plausible and persuasive form.”

In 2016, Jonathan Haidt, a professor of psychology and ethics at New York University’s Stern School of Business, argued that at many universities, the search for truth has been replaced by a quest for social justice. These two missions are incompatible, Haidt wrote: “At Truth U, there is no such thing as blasphemy. Bad ideas get refuted, not punished. But at SJU, there are many blasphemy laws – there are ideas, theories, facts, and authors that one cannot use.” The patron saint of social justice universities, according to Haidt, is not John Stuart Mill but Karl Marx, who wrote, “The philosophers have only interpreted the world, in various ways; the point is to change it.” Our universities are now dedicated less to dispassionate investigation than to political activism.

The previous year, Haidt and two colleagues, concerned that a lack of ideological diversity was having a negative impact on the quality of research in their disciplines, put together a website and blog, called Heterodox Academy, as a place for social science academics to discuss challenges inside their universities. HxA, as it is known, has since grown into an international, non-partisan organization of over 5,000 professors, administrators, and students whose mission is to promote viewpoint diversity and constructive disagreement as the foundations of the academic enterprise. Its vision, as expressed on its website, is “an academy eager to welcome professors, students, and speakers who approach problems and questions from different points of view.” As its tagline says, “Great minds don’t always think alike.”

Modern universities rarely embrace this vision. Instead, their strategic plans and mission statements typically identify a set of political values and goals such as equity, diversity, and inclusion. “Diversity” means variation in skin colour, not in ideas. Ideological diversity is anathema to these causes. Left-leaning academics once championed ideological diversity, for that was the route to disseminate and legitimize their own views. Now that they have captured the university, viewpoint diversity is perceived as dangerous.

At my law school, our faculty board recently rejected by a vote of 33 to 4 a proposal to add viewpoint diversity as a value and goal to its strategic plan. Viewpoint diversity, along with HxA itself, was said to be an “alt-right ploy” that might weaponize those who do not agree that society should be transformed in accordance with the values expressed in the plan.

The alternative to viewpoint diversity is an academic culture of homogeneity and conformity. Universities have become political institutions that prefer fidelity to the prevailing ideological view. Students who seek education rather than indoctrination should beware.

Bruce Pardy is professor of law at Queen’s University, and a member of the Heterodox Academy.