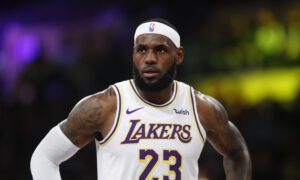 Nate Silvester, who was working for the Bellevue Marshal’s Office when he made the video, was suspended in April while an investigation took place. He was later allowed to return to work but placed on probation.

During the week of May 20, while working, Silvester violated several city and state policies, Mayor Ned Burns said in a statement.

“After his previous policy violations Deputy Marshal Silvester was placed on probation and was on, what is called, a ‘last chance agreement’ with his superior officers. Because of his continued policy violations, the Marshal has terminated Mr. Sylvester [sic],” Burns said.

The firing did not stem from the former officer’s social media posts, the official said.

“The policy violations have nothing to do with the tone or the tenor of his speech that he posts online. He was not terminated for the content of his speech; he was terminated for his failure to follow clearly laid out and well established policy,” he added.

Silvester mocked James, a forward with the Los Angeles Lakers, after the basketball player posted a photograph of a police officer who fatally shot a girl in Ohio last month. The officer, Nicholas Reardon, was attacking others with a knife when she was shot.

Silvester mimicked a situation where he and other officers responded to a person wielding a knife and politely asked the person to put the knife down.

“Listen, I’m out here at a disturbance call, and there’s a guy trying to stab another guy with a knife. What do you think I should do?” Silvester pretended to ask James.

The Bellevue Marshal’s Office said previously it was aware of the “extreme controversy” over the video. “This is NOT how we expect our Deputies to act on duty or use city time. This is a personnel issue that is being dealt with internally,” it added.

Silvester appeared on Fox News’s “Hannity” late Thursday after his termination was announced.

“I am the latest target of cancel culture. That’s all it is,” he said.

“None of my other videos that depicted me in my uniform or involving body camera footage, none of those mattered. They didn’t care about those. It wasn’t until my LeBron James TikTok struck a political nerve that they started to pay attention and complain about it and came up with forms of discipline.”

China pushes back on int’l probe into COVID-19 origins