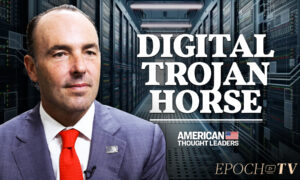 Kyle Bass: The Chinese Regime Controls 200 Sq Miles in Texas Next to Major Air Force Base

A company with ties to the Chinese Communist Party owns 130,000 acres of land in Texas—right next to America’s largest air force pilot training base.

The CEO of the company, Sun Guangxin, is a former officer in China’s People’s Liberation Army and one of the largest landowners in China’s Xinjiang province. And the land, purchased to build wind farms, actually sees little wind.

So what’s going on here?

And in other news, why should America be concerned about China’s emerging digital currency?

In this episode, we sit down with Kyle Bass, founder and principal of Hayman Capital Management and a founding member of the Committee on the Present Danger: China.

WARSAW—Champagne corks popped at the stroke of midnight on Friday as bars and restaurants in Poland opened their outdoor terraces for the first time in over six months and many Poles went out to celebrate. […]

DENPASAR—A missing Indonesian submarine has been found, broken into at least three parts, deep in the Bali Sea, army and navy officials said on Sunday, as the president sent condolences to relatives of the 53 […]