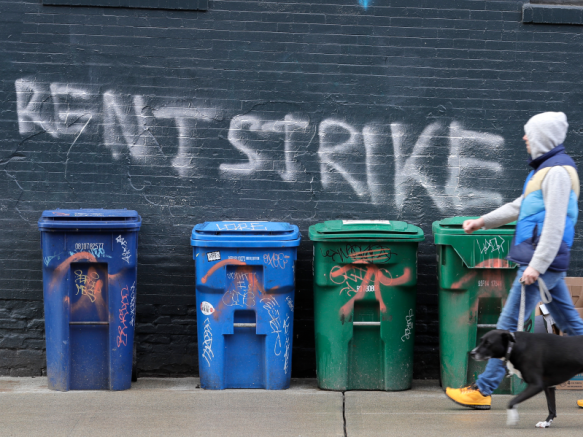 A pedestrian walks past graffiti that reads “Rent Strike” Wednesday, April 1, 2020, in Seattle’s Capitol Hill neighborhood. With millions of people suddenly out of work and rent due at the first of the month, some tenants in the U.S. are vowing to go on a rent strike until the new coronavirus pandemic subsides. (AP Photo/Ted S. Warren)

Signs calling for a nationwide rent strike are popping up across the country as renters and landlords prepare for the first of the month. Organizers have said the movement is meant to help support those who are struggling financially and are unable to pay rent and face eviction.

The union went on the news to call for a mass rent strike on May 1st. We ask tenants who can pay to withhold rent in solidarity with your neighbors who can’t. We demand the federal government freeze rent and mortgage payments NOW and house the homeless in vacant properties. pic.twitter.com/GkgudjTRGk

In an effort to aid the movement, tenant advocacy groups ‘Right to Counsel NYC Coalition‘ and ‘Housing Justice for All‘ compiled a guide for strikers that included a history of tenants’ rights and their current demands. Among the demands is a call for a rent freeze for all residential and commercial renters as well as immediate relief for everyone who has housing debts due to the crisis.

Opponents to the strike have said it will be counterproductive and unfairly targets landlords who are suffering as well.

“By the same token, the property owners, the landlords are going to look to the government and say look we’re deferring all of this rent, but our taxes are due, our mortgages are due,” explained Glenn Spiegel, a commercial real estate expert. “What kind of relief can you give us?

Many states have already enacted housing protections to ensure those affected by the crisis won’t lose their housing and members of Congress are pushing for a mortgage freeze to alleviate stress on landlords. However, landlords have said renters are taking advantage of these protections and will have to pay eventually.

“All of the rent will become due at some point and they’ll end up in litigation,” Spiegel continued. “While the litigation will take a long time to resolve, because there will be an influx when the courts open, it still will happen.”

Rumors of a strike began in late March as economies closed and the first layoffs were reported. As a result, more than 13.4 million people did not pay rent on time in April.

So far, strikes have been organized on the local level, but a few national groups on social media are gaining awareness. Experts have predicted the combination of a skyrocketing unemployment rate and community organizations may result in an increase in the number of May defaults.

Why the Pandemic Played Out Differently Across the Developed World

Commentary Perhaps the most noteworthy feature of the pandemic is that there was no uniform pattern of impact across advanced countries. The pandemic unfolded differently in each developed country, and governments that spent more did […]

The Moment a Belarusian Dissident Knew His Time Was Up

VILNIUS—Ryanair Flight 4978 had already begun its descent into the Lithuanian capital when the pilot announced that the plane would be suddenly diverting to Minsk, capital of neighboring Belarus. There was no explanation. But one […]