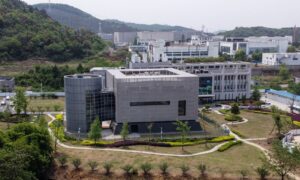 Vox on Monday appended an editor’s note to an article that claimed the idea that the CCP (Chinese Communist Party) virus originated in a laboratory in China had been “debunked.”

“Since this piece was originally published in March 2020, scientific consensus has shifted. Now some experts say the ‘lab leak’ theory warrants an investigation, along with the natural origin theory,” Vox’s note stated.

“Some language in this article was updated in April 2020 to reflect scientific thinking, but it has not been updated since then,” it added.

Readers noted that Vox conducted a “stealth edit,” or a quiet update, after the article was published. For instance, the writer, Eliza Barclay, initially wrote that “virologists who’ve parsed the genome and infectious disease experts who study coronaviruses have more than enough evidence to show that the virus is brand new and came from nature, not the Wuhan lab.”

The line was later altered to say the experts “who study coronaviruses say they have enough evidence the virus is brand new and came from nature.”

Language was softened elsewhere, too.

“The emergence of the virus in the same city as China’s only level 4 biosafety lab, it turns out, is pure coincidence,” Barclay initially wrote.

The article now states, “The emergence of the virus in the same city as China’s only level 4 biosafety lab, it turns out, appears to be pure coincidence.”

The Vox note is the latest in adjustments to articles that claimed, citing “scientific consensus,” that the theory the virus started in a lab before being released on purpose or by accident was debunked.

Politifact recently retracted one of its so-called fact checks about the idea. The website first alleged the idea was a “debunked conspiracy theory” but now says the assertions the virus “could not have been manipulated … is now more widely disputed.”

The New York Times in March called the lab origin theory “debunked” when reporting that Dr. Robert Redfield, the former head of the Centers for Disease Control and Prevention, said during a TV appearance that he believed the virus was probably from a laboratory.

“The other people don’t believe that. That’s fine. Science will eventually figure it out,” Redfield said.

The paper updated the piece to say that Redfield “offer[ed] no evidence in favoring speculation that the coronavirus originated in a lab.”

Little evidence is available to ascertain the origins of the virus. The CCP has resisted most efforts to delve into the virus origins.

A newly released U.S. intelligence report indicated that three researchers at the Wuhan Institute of Virology, located in the Chinese city where the virus first emerged, sought hospital care with COVID-19-like symptoms in November 2019.

A view of the home of U.S. District Judge Esther Salas. on July 20, 2020 in North Brunswick, New Jersey. Salas’ son, Daniel Anderl, was shot and killed and her husband, defense attorney Mark Anderl, […]