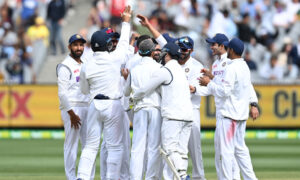 The vast majority of Australia’s cricketers from our 38-strong Indian Premier League have arrived in Sydney, almost two weeks after the Twenty20 tournament was suspended because of COVID-19.

Players, coaches and commentators were on board a charter flight from the Maldives that touched down in the NSW capital on Monday morning.

Former Test batsman Mike Hussey, who remained in India to self-isolate after contracting the coronavirus, is expected to arrive later on Monday via a commercial flight from Qatar.

The cricketers will spend a fortnight in NSW’s hotel-quarantine system, with no exemptions and concessions.

Prime Minister Scott Morrison flagged on Sunday the “NSW government is happy for them to come in over the cap (on return travellers)”.

The IPL was halted on May 4 because of COVID-19 cases among players and support staff.

Australians involved in the event travelled to the Maldives on May 6 via a charter flight that was organised and funded by the Board of Control for Cricket in India (BCCI).

The group’s journey home was stalled by Australia’s ban on travellers from India but Morrison, speaking on Sunday, all but confirmed their imminent return.

“They haven’t been given any (special dispensation),” the prime minister said.

“NSW government is happy for them to come in over the cap. That’s something we insisted upon and they were happy to agree with that.

“But they’ll come back under their own steam, on their own ticket.

“They won’t be taking the spot in quarantine of any other Australian who is returning home under the NSW caps.

“We appreciate the fact that the NSW government and Gladys Berejiklian, in particular, has been so strong in supporting those higher caps, but in this case, ensuring that when the cricketers come back they don’t take the spot of anybody else.”

The BCCI is believed to be funding travel and quarantine arrangements for Australians involved in the IPL.

Cricket Australia’s interim chief executive Nick Hockley has previously insisted “we are not seeking any kind of special exemptions whatsoever”.

“We will work with the Australian government and the relevant state governments to make sure we’re not taking spaces of anyone else … that is what we’re committed to doing,” Hockley said.

The foster mother of a knife-wielding Ohio teenager who was killed during an officer-involved shooting earlier this week revealed that an argument about house cleaning triggered the dispute. Angela Moore, the foster parent of 16-year-old Ma’Khia […]