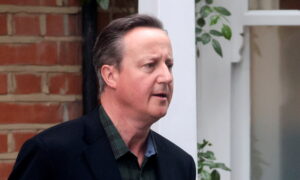 LONDON—David Cameron, the former British Prime Minister, said on Thursday he was not motivated by his own financial interest when he lobbied the government on behalf of the now-collapsed supply chain finance firm Greensill Capital.

Although Cameron’s extensive lobbying efforts did not result in policy changes, they have raised questions about the extent to which former British leaders can or should use their status to try to influence government policy.

Cameron declined to say how much he was paid by Greensill, or how much he would have made from shares he owned if the business had prospered, but said he had “a big economic investment” in its future and wanted the business to succeed.

He said he was motivated by, and believed in, Greensill’s ability to help other businesses and the country during the early stages of the pandemic.

Cameron repeatedly contacted senior ministers over a four-month period in 2020 to lobby for Greensill, which filed for insolvency protection in March, documents published on Tuesday showed.

He said he thought his use of SMS and WhatsApp messages was appropriate given the severity of the COVID-19 crisis, but that different rules could apply in the future.

“One of the lessons I take away is ex-prime ministers should only ever use letter or email, and should restrict themselves far more,” he said.

Cameron, who was Britain’s prime minister between 2010 and 2016, said it was difficult for him to have to face parliamentary scrutiny over Greensill’s collapse.

“This is a painful day coming back to a place that I love and respect so much, albeit virtually, but in these circumstances,” he said.

“Lobbying itself is a necessary and healthy part of our democratic process, but I accept that there’s a strong argument that having a former prime minister, engage on behalf of any commercial interest, no matter how laudable the motives and cause, can be open to misinterpretation,” he said.

Cameron was lobbying the government to allow Greensill, founded by Australian banker Lex Greensill in 2011, to access a COVID-19 financing scheme.

The Bank of England said in April that no changes were made to the COVID Corporate Financing Facility as a result of communication between Cameron and Bank officials.

Cameron told a committee investigation into the firm’s collapse and its interactions with government, that he had not been hired by Greensill as a lobbyist, but the situation changed at the start of the pandemic.

At the time he was lobbying ministers, Cameron said he had no sense that Greensill was in difficulty.

“I did not believe in March or April, when I was doing this contact, that there was a risk of Greensill falling over,” he said.

Cameron stepped down as prime minister in 2016 after he unexpectedly lost a referendum on whether Britain should remain in the European Union.

VATICAN—Pope Francis met with John Kerry, climate envoy for the Biden Administration, on May 14 after a closed-door conference on “Dreaming of a Better Restart” for the global economy. Kerry is one of the first […]

In this photo provided by the Office of Governor Andrew M. Cuomo, Gov. Cuomo briefs the media during a coronavirus news conference at Marist College, Friday, May 8, 2020, in Poughkeepsie, N.Y. (Darren McGee/Office of […]