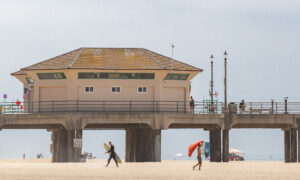 According to metrics released May 9, the county’s daily case rate per 100,000 people was down to two, qualifying it for yellow tier status.

Both of these rates had qualified for yellow tier for weeks, but the case rate stuck in orange tier status was what kept the county from advancing to the least restrictive tier.

Bartlett said that she is excited for the advancement because it will bring the region closer to having a thriving economy again.

“It’s one step further along to getting back to that sense of normalcy, where we can reopen our local economy, people can have thriving businesses again, people can get back to their day-to-day lives and go to the businesses that they haven’t been able to go to for significant periods of time now, like the bars for instance, that have been pretty much closed except for outdoors,” she said.

All of California’s 58 counties will move to the green tier June 15, when the state is expected to almost fully reopen. The exact restrictions that will be lifted have not yet been released by the governor’s office.

Bartlett said green tier will be great for tourism, which is common in Orange County.

“Just getting to yellow tier, in and of itself is great for tourism, but of course we want to fully reopen our local economy,” she said. “So, hopefully, by June 15 when we have the state reopening and we’re out of the tier system we’ll be able to open to a greater extent. I don’t know if it’ll be 100 percent in all categories, but hopefully opened up to a much greater extent than even the yellow tier.

“Based upon our current COVID numbers and our metrics, I believe that Orange County has the worst of the COVID pandemic behind us, but it all depends on what new variants are coming forth and whether or not the current vaccines are applicable to all of the variants.”

South Dakota Gov. Kristi Noem said she signed a pledge this week that aims to restore “patriotic education” as liberals push critical race theory in the school curriculum. Republicans like Noem have criticized the race curriculum for sowing […]

Landscapes of the Sublime

Come forth into the light of things, let nature be your teacher. —William Wordsworth In times when “progress” charts a potentially perilous course for humanity, it’s the role of art to remind us of our […]