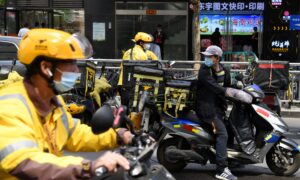 Prior to May 1—Labor Day—a public holiday in China, the Chinese Communist Party (CCP) staged a wave of propaganda to highlight a young delivery driver, Gao Zhixiao, on its media networks. At the same time, a pro-democracy rights group calling for the release of Chen Guojiang, a grassroots spokesperson for China’s delivery drivers, suddenly closed.

On April 27, Beijing TV Station began to roll out a series of documentaries to showcase how CCP officials take citizens’ interests seriously by role-playing in different sectors without revealing their true identities. The first episode presents the story of a Beijing official, who followed Gao as an apprentice. The show has been widely circulated by the CCP-controlled media outlets, whose purpose is to praise CCP leadership.

Gao’s unusual rise suggests that the CCP has well-orchestrated a campaign to avert attention from the detained head of Delivery Knights’ Union, Chen Guojiang, a grassroots spokesperson for China’s delivery drivers, said a source who would only disclosed his surname as Zhang to The Epoch Times.

Gao entered the spotlight after his portrait appeared on a special TIME report showcasing COVID-19-hit modern life on March 19, 2020. Since then, he has been treated as a hero in China who risked his health, and shuttled emergency supplies to customers amid the pandemic, and was invited to multiple official events hosted by Chinese authorities, according to Zhang.

On June 19, 2020, China Media Group reported that Gao attended the 37th bi-weekly open discussion session held by the CCP’s top political advisory body and had an in-person talk with its chief, Wang Yang.

Gao’s idea of building a community for delivery drivers has been substantially promoted on CCP-controlled media outlets, according to the source.

According to Gao, his community, which he calls “Riders’ Home” would become an offline service and rest location where fellow drivers can recharge their motorcycles or cellphones.

Currently, he has created at least seven WeChat messaging groups that include more than 3,000 members.

Chen, founder of the union, has been held in custody on a charge of picking quarrels and provoking trouble—a catch-all allegation commonly used by CCP police to snare both petty offenders and rights activists.

“Whereas Chen was incarcerated for organizing his union, Gao has remained safe,” Zhang said. “Rather, the latter has turned into an influencer on the CCP’s TV stations and magazines. So it’s plain to see that the CCP is backing the ‘star delivery driver’ to dilute the impact of Chen and his followers and weaken their vigilance.”

A left-leaning student who requested anonymity told The Epoch Times that Gao had once smeared Chen in one of his chat groups, claiming Chen’s arrest was due to falsifying certificates.

“Police never mentioned that,” the student said. “As a delivery driver himself, doesn’t Gao know the fact that Chen was jailed for speaking out for the community? How can such a guy stand up for this group?”

Employee No. 51, a left-wing rights group that led events calling for Chen’s release, declared its closure in a WeChat statement on May 1.

The number “51” is a pun; the Chinese pronunciation “wu yao” sounds like “I want,” as a rights activist may do to raise a claim.

Its statement read, “They [the CCP authorities] are planning to kill two birds with one stone, defeat us and Delivery Knights’ Union by citing our support to Chen as an excuse.” It said it chose to come to a halt for the time being so that it could move forward better in the future.

Some of its members believed the group’s official account could survive the CCP’s crackdown if it continues to operate on overseas sites like Telegram.

However, the administrator noted that sites like Telegram are banned in China and cannot be accessed, making it pointless.

Zhang suspects that Employee No. 51 faced pressure from CCP authorities, which likely caused its closure.

A mainland China commentator who requested anonymity told The Epoch Times that the CCP regime was driving a wedge in the community of drivers and breaking it up.

“Chen Guojiang’s arrest triggered anger among a large portion of them and work stopped in multiple cities,” he said. “Chinese authorities are trying to use a carrot-and-stick tactic.”

However, the commentator predicted that the strategy wouldn’t work—or even worse, it might backfire.

“It’s natural to have an organizer like Chen when drivers wish to unite as a whole for their interests. You can never erase such a thing by force,” he said.

If Gao’s Riders’ Home doesn’t speak up for its members, they would be spurred to confront the CCP; if the regime grants certain autonomy to the group, it might be afraid the home would turn into another “unstable factor,” and turn on the CCP, the commentator speculated.

Zhang believes it’s clear that the CCP has no intention of bettering delivery drivers’ jobs. Otherwise, Chen wouldn’t have been jailed. Nor would Employee No. 51 have been forced to close.

As of June 2020, public data shows Chen had created 11 chat groups, with more than 14,000 followers and a good reputation for helping defend their rights and solve disputes during his spare time.

He was born into a poor rural family in Bijie, a prefecture in southeastern China’s Guizhou province, according to Washington-based NPR. At 14, he left his hometown to job hunt in China’s big cities, like many young men from his village.

In around July 2019, he created his first WeChat group for delivery drivers.

In October the same year, he called on delivery drivers to go on strike against unreasonable treatment and was given a 26-day detention.

On Feb. 18, 2021, Chen reported online that e-commerce giant ele.me was suspected of fraud in its rewards for drivers during the Chinese New Year holidays.

On Feb. 25, he was taken away by Beijing police officers for unknown reasons.

On March 17, Chen’s family received a notice of criminal detention, which said that he had been detained on suspicion of picking quarrels and provoking trouble.

According to NPR, the labor organizer faces five years in prison.

Zhang Yong contributed to this report.

Premature Baby Gorilla Rejected by Mom Is Hand-Reared, Then Adopted by Her Own Great-Grandma

After being born six weeks prematurely, a baby gorilla was rejected by her mother. However, keepers at Howletts Wild Animal Park in Kent, England, stepped in, hand-rearing the infant, who weighed little more than a […]

BOSTON—A former senior executive at private equity firm TPG Capital was sentenced on Wednesday to three months in prison for participating in a vast U.S. college admissions fraud scheme by paying $50,000 to rig his […]