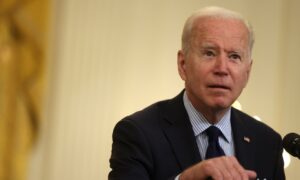 The Biden administration is rolling back an immigration policy sought by former President Donald Trump that would have limited work permits for immigrants with final deportation orders.

Trump on Nov. 19, 2020 proposed that the Department of Homeland Security (DHS) revise its regulations regarding employment authorization for immigrants who have a final order of removal from the country by a federal judge, and are released from DHS custody on an order of supervision.

On Monday, DHS Secretary Alejandro Mayorkas announced that President Joe Biden’s administration will be withdrawing the proposal after reviewing 302 public comments the department received during a 30-day period.

Those who backed the proposal supported it because they believed it would deter illegal immigration and protect U.S. workers, Mayorkas wrote.

Commenters opposed to the rule were concerned about the immigrants’ ability to support their families and the impact it would have on their potential employers.

The rule “would impose exorbitant costs and burdens on U.S. employers related to labor turnover,” the DHS said.

“DHS believes that continuing to provide employment authorization to individuals who have final order of removal and are released from DHS custody on an order of a supervision is consistent with this administration’s values and priorities on immigration enforcement,” Mayorkas said in justifying the withdrawal.

He added, “It will allow individuals who do not fall within the administration’s enforcement priorities and who are still in the United States to continue to qualify for employment authorization, to legally work, remain self-sufficient, and support their families, which in many instances include U.S. citizen children.”

Since taking office, Biden has issued a number of orders rescinding Trump-era immigration rules, including suspending the U.S.-Mexico border wall construction, the “remain in Mexico” policy, and dozens more executive actions. According to an analysis by the Migration Policy Institute, Biden unleashed more than 90 executive actions during his first 100 days in office.

Jessica Vaughan of the Center for Immigration Studies, told Breitbart News that the latest move is “a de facto amnesty” for illegal immigrants.

“This is yet another common sense Trump reform that is being reversed,” Vaughan told the news outlet. “Most Americans would be astounded to hear that in 2019 the government issued more than 25,000 work permits to people who have been ordered removed by an immigration judge. These are often criminals who can’t be deported because their home country refuses to take them back.”

“So, we just let them stay, with benefits like a work permit. The Trump administration finally got around to stopping this practice, but not fast enough to keep it from being undone,” Vaughan added. “We can expect the Biden administration to use the work permit authority to the maximum extent possible, because it’s a de facto amnesty that is easier than trying to get an amnesty bill through Congress.”

Republicans have blamed Biden’s messaging on immigration as well as a rollback of some Trump-era policies for the surge of illegal immigration and crowding at border facilities.

In March, immigration agents apprehended over 172,000 individuals seeking to illegally enter the United States. According to the latest report by U.S. Customs and Border Protection, more than 351,800 encounters were made in the first three months of 2021, compared to 107,700 during the same period in 2020.

The Biden administration has blamed the influx of illegal immigrants on seasonal factors and the crowding at facilities on a “broken” immigration and asylum system inherited from the Trump administration.

KARACHI, Pakistan—A coronavirus variant first discovered in the United Kingdom now accounts for up to 70 percent of COVID-19 infections across Pakistan, a research centre studying the disease in the country said on Saturday. The […]

Sen. Blunt warns of damaging impact vaccine mandates will have