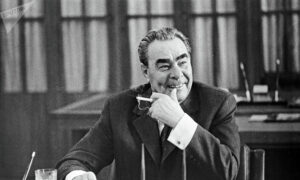 I expected the Biden administration to be bad, but I never expected it to be this bad this quickly.

Practically everything from public safety to education (!) to foreign policy to the border to the military has gone haywire in months with worse undoubtedly to come.

Some or much of this of this is likely deliberate with the “moderate” Joe Biden having been almost miraculously installed at the last moment to turn the ship of state leftward on a watery dime.

This put a seemingly benign public face on anything but benign policies,.

Where have we seen this before?

Well, not that long ago in the Soviet Union.

In Biden, America has found its Leonid Brezhnev—an addled leader surrounded, propped up and dictated to by an unseen Politburo that, unlike the original, does not even show its faces for May Day on Red Square.

You don’t have to be a Sovietologist to recall Brezhnev’s reign (1964-1982) as General Secretary of the Communist Party and Chairman of the Presidium of the Supreme Soviet was the beginning of the end for the Soviet Union.

The London Sunday Times reported during most of those years Brezhnev was effectively addicted to what were politely called “sedatives” and that his doctors needed four to six weeks to prepare him for a public appearance.

Brezhnev apparently had difficulty even mouthing the platitudes of Soviet-speak.

Key politburo members of the time—KGB chief Yuri Andropov, defense minister Dmitri Ustinov and leading party ideologue Mikhail Suslov—were evidently happy with this arrangement, being able to manipulate affairs, foreign and domestic, from behind the throne.

How unfortunately familiar this sounds, although such behind the throne manipulation is hardly unique in history.  In fact, it is quite common, including in our time.

But it has reached such a level in today’s America that speculation about who is really in charge is endless—Barack Obama, Susan Rice, Valerie Jarrett, several people inside the administration like chief of staff Ron Klain, Kamala Harris, Jill Biden, Nancy Pelosi, AOC and her entourage, even Michelle Obama.

What is going on?

I used to be one of those who downgraded accusations of communism on the part of our more liberal left. Only hardcore outliers or spies were true communists. How could we be so stupid and heartless as to even show interest in a system that not only has failed so consistently but that has resulted in something approaching one hundred million deaths, exponentially more than any other religion or ideology?

But our current politburo-like obfuscation is, well, communistic to the core and what we are seeing in action, I have to admit after years, is nascent American Communism throughout our federal government, not to mention many of our more populous blue states.

We no longer have two political parties jockeying over such comparatively minor matters as tax rates and the extent of welfare programs.  This is the real, deep ideological, game-changing deal.

That Antifa and Black Lives Matter—both self-admittedly Marxist organizations wreaking havoc on our city streets—are never criticized by our current administration and are left to do what they do is just one example of the spread of this burgeoning communism.

The continuing leftward lurch of our already leftist Department of Justice is a yet more dangerous one.

Most of all, our educational system K-through Ph.D., as many have pointed out, is, consciously or unconsciously, with the Goebbels-like critical race theory at the forefront, imitating the Chinese Cultural Revolution in all but the dunce caps (so far).

The good news we can hold onto is that a number of red states are starting to resist the communistic trend in education and elsewhere.

A cold war between red and blue states has already started—capitalism versus communism all over again, although the contemporary form of communism might be more exactly called fascist oligarchy.  This is Marxism with the working class left out—go figure.

In the midst of all this, the figurehead-like Joe Biden is already making his name on the short list of worst presidents of all time and is headed for the top. Pretty soon he’ll be number one with a bullet.

But will there be a country left for a ranking of this nature? That is the question.

Roger L. Simon is an award-winning novelist, Oscar-nominated screenwriter, co-founder of PJMedia, and now, editor-at-large for The Epoch Times. His most recent books are “The GOAT” (fiction) and “I Know Best: How Moral Narcissism Is Destroying Our Republic, If It Hasn’t Already” (nonfiction). He can be found on Parler as @rogerlsimon

Stream of Migrants Stops as Morocco Beefs up Security

CEUTA, Spain—Authorities in Ceuta, the Spanish enclave at the center of a humanitarian crisis and a diplomatic dispute between Morocco and Spain, said Thursday that no migrants crossed overnight into the city after security forces […]

This Nov. 30, 2019 photo shows the church on the grounds of The Alamo in San Antonio, Texas. The remains of three people have been recovered from a burial room and the church. (AP Photo/Ken […]