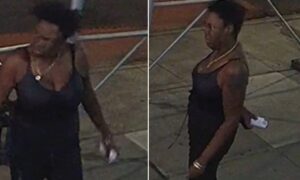 The New York City Police Department said officers are searching for a woman who hit an Asian woman with a hammer at Times Square this weekend.

Officials said the incident occurred around 411 W. 42nd St. after the suspect demanded that two women remove their masks.

The NYPD said that “Two Asian females, 31 and 29, were walking on the sidewalk when an unknown individual demanded they remove their masks and then struck the 31-year-old female in the head with a hammer causing a laceration.”

Video from Sunday, May 2nd attack on two Asian females, 31 and 29, who were walking on the sidewalk when an unknown individual demanded they remove their masks and then struck the 31-year-old in the head with a hammer causing a laceration. Info? ☎️1-800-577-TIPS pic.twitter.com/9YMaQfUhzm

Officials told the New York Post that police recovered the hammer, but the attacker is still at large.

In late March, the NYPD confirmed that New York City police officers will begin serving as decoys in an attempt to prevent hate crimes.

“We’ll be using police officers in plainclothes and in teams to prevent New Yorkers from becoming victims in the first place. And I’ll say this so the message is very clear to everyone. The next person you target whether it’s through speech, menacing activity, or anything else walking along a sidewalk or on a train platform may be a plainclothes New York City police officer. So think twice,” NYPD Commissioner Dermot Shea said during a press conference at the time.