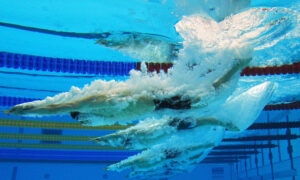 The United States is set to face a widespread chlorine shortage this summer, as demand for chemicals from pool owners across the country surges amid the ongoing CCP virus pandemic.

Americans are spending more time at home due to the CCP (Chinese Communist Party) virus pandemic, and as pool season approaches, prices of the chemical have started to creep up. In some parts of the country, chlorine tablet prices have doubled from last year.

Supplies are also running low due to a major fire incident at Bio-Lab pool and spa treatment products factory, a chemical plant in Louisiana on Aug. 27 last year, caused by Hurricane Laura.

According to a report by the U.S. Chemical Safety and Hazard Investigation Board, a significant section of the roof of the warehouse was damaged during the hurricane, impairing production.

The plant won’t be be back in operation until spring next year, CNBC reported, leaving just two manufacturers, Occidental Petroleum and Clearon, to produce chlorine tablets for the whole country.

With a major shortage pending, retailers are now urging pool owners to “prepare” ahead of time as the extent of the chlorine shortage is still unknown.

“A steep price increase is likely. The extent of the chlorine shortage is still unknown,” B&B Pool and Spa Center, a Chestnut Ridge, New York-based retailer states on its website. “While it is still early yet for the swimming season, it is advisable to prepare now for your pool opening. That includes stocking up on chemicals needed to get you through the majority, if not the entire swimming season.”

Chlorine can come in the form of powders, tablets, and liquids, although the majority of pool owners in the United States use the chemical in tablet form, according to Aquatic Facility Training & Consultants CEO Rudy Stankowitz.

The chemical prevents and kills algae, and protects swimmers from illnesses such as legionella, cryptosporidium, and naegleria fowleri.

John Swygert, CEO of Ollie’s Bargain Outlet Holdings, told investors on a recent conference call that pool chlorine is “not easy to get” and that there’s a “chlorine shortage nationally that we’re all going to have to deal with,” USA Today reported.

According to IHS Markit data cited in a Goldman Sachs report on the issue, it is estimated that the price of chlorine will increase by roughly 58 percent from June through August, compared to the same period last year.

The New York-based investment banking group in its survey found that of 26 pool supply shops, 15 expressed “uncertainty or doubt when asked about whether they will have enough chlorine for pool season.”

Pool Corp CFO Mark Joslin told analysts during an earnings call on April 22 that the shortage is likely to push pool owners to find alternatives to chlorine for pool sanitization.

“Now that simply means that people are going to move their method of sanitization to another product, either a granular product or a liquid product. But there’s no shortage of ways to sanitize the pool,” Joslin said. “It just simply means at a certain point people will shift. We’ve also seen certain parts of the country accelerating the use of salt as a method of sanitization too.”

Arizona Attorney General Mark Brnovich on Tuesday wrote a letter to Sens. Kyrsten Sinema (D-Ariz.) and Mark Kelly (D-Ariz.), urging them to reject the House Democrat proposal to expand the Supreme Court from nine to […]

Hate Caller to Larry Elder: ‘You Are Nothing but a House Negro’

From time to time, Larry Elder will get a hate letter or two. Then, when the ink runs dry from their poisonous pen, they pick up the phone and audibly denigrate him. In this episode, […]