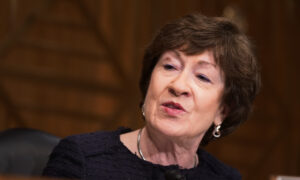 Sen. Susan Collins (R-Maine) on Sunday pushed back on the White House’s proposal to raise the corporate tax rate to 28 percent to pay for President Joe Biden’s $2.25 trillion infrastructure plan.

Collins was commenting on a key feature of Biden’s mammoth plan, which would raise the corporate tax rate to 28 percent from the current 21 percent. Raising the corporate tax rate would partially repeal the 2017 Tax Cuts and Jobs Act, which was seen as a major achievement of the Trump administration and a legacy Republicans would likely support preserving.

“Let me tell you what I won’t to support. I won’t support American businesses paying the highest corporate tax rate among developed countries in the world once again, and, unfortunately, that’s what 28 percent would be,” Collins, who is a key swing vote in the 50-50 Senate, told CNN’s State of the Union. “And that means that jobs would once again go overseas.”

During the interview, the Maine senator did not share how far she was willing to go to compromise on Biden’s plan but she touted the $568 billion counter-proposal introduced by Sen. Shelley Moore Capito (R-W.Va.) and other Senate Republicans. That plan would focus on the traditional concept of infrastructure, including $299 billion on roads and bridges, $61 billion on public transit systems, $20 billion on rail, $35 billion on drinking water and wastewater infrastructure, $13 billion on safety programs, $17 billion on ports and inland waterways, $44 billion on airports, $65 billion to expand broadband access, and $14 billion to address water shortages.

“Well, at this point, I think now that the Republicans have put forth a reasonable offer, it’s up to the president to do a counteroffer to us,” she said while also noting that the president’s current proposals total to more than $4 trillion.

“That’s the amount that we spent to win World War II. So this is an enormous package when you take both the traditional core infrastructure parts and the huge expansion of social programs that the president is advocating,” she added.

She also said that it was “premature” to discuss the funding of an infrastructure plan when details of such a plan have not yet been agreed on.

Other Republicans have also expressed an appetite for smaller infrastructure solutions without hiking the corporate tax rate. Rep. Steve Scalise (R-La.) on Friday told Axios that he was “very open” to negotiating a bipartisan package without raising taxes.

“There are a few different ideas that are being worked on by Republicans and Democrats in the hundreds-of-billions-of-dollar range, not the trillions of dollars, but the most important part is the plans that I’ve seen that I like and would support would be plans that are fully paid for without new taxes,” Scalise said.

“Democrats don’t understand that logic, but when we cut taxes we brought millions of jobs back to America. You saw so many companies relocating companies that had left America to go to places like Ireland or Canada that moved their headquarters back, that moved jobs back by the millions,” he said.

“And because of that you had more people working, paying taxes. Hardly anybody was unemployed. If you wanted a job, every company was looking for workers, and they were paying higher wages. So it was great for American hardworking taxpayers, but it was also good for the Treasury because we took in more money by cutting taxes.”

Democrats will need to convince at least 10 Republicans in the Senate to pass their infrastructure bill, or they could push it through without bipartisan support by once again turning to budget reconciliation, which would be seen by many to undermine Biden’s campaign promise to govern by unifying the country.

Ukrainian National guard soldiers guard a mobile checkpoint together with the Ukrainian Security Service agents and police officers during a joint operation in Kharkiv, Ukraine, Thursday, Feb. 17, 2022. Fears of a new war in […]

The Arizona House of Representatives on May 26 rejected a bill supported by most Republican state lawmakers that would have required voters to include identification with their mail-in ballots. Bill SB1713 was rejected on a 29-31 vote with two […]

More Canadians Hospitalized Over Substance Use Since Start of Pandemic: Study

Thousands more Canadians received substance-related hospital care during the COVID-19 pandemic than in the previous year, disproportionately effecting men and people from lower-income neighbourhoods, a study revealed. In the first 7 months (from March to […]