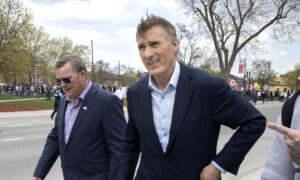 Conservatives in Canada who tolerate lockdowns, believe the debate over climate change is over, think it ok to cancel those who disagree with them, and love to hear empty platitudes from their leaders have their guy in Erin O’Toole, leader of the Conservative Party of Canada.

Other conservatives—the freedom-loving, political-correctness-hating, free-market kind—will soon be rethinking Maxime Bernier, the former MP who left the Conservative party in disgust three years ago to start the rival People’s Party of Canada.

Bernier could well be the most popular conservative politician in Canada, and one of the very few who have principles, which is a reason he keeps losing. In 2017, running to replace the retired Stephen Harper as Conservative leader, Bernier touched a third rail of Canadian politics by pledging to abolish Canada’s supply-management system. Although supply management is reviled by all free marketers—it artificially inflates the cost of food through quota systems for the benefit of relatively few farmers, particularly those in vote-rich Quebec—Bernier’s position led to defeat at the hands of Andrew Scheer.

Scheer prevailed, albeit narrowly (he received 50.95 percent of the party members’ vote to Bernier’s 49.05 percent), by convincing party members that Bernier’s position, though economically impeccable and inherently fair to consumers, was a loser politically because it would offend special interests. Bernier then left the Conservative party, saying it was “too intellectually and morally corrupt to be reformed,” a position endorsed by 55 percent of Canadians and 21 percent of Conservatives in an Abacus Data poll.

Canadians admired Bernier’s moxie in wanting to create another party and his revulsion at pandering to special interests. An Advanced Symbolics poll in 2018, released around the time that he quit the Conservative party to form his own party, analyzed a representative sample of 220,000 Canadians on social media and pegged Bernier’s popularity as a leader at 40 percent, more than Scheer’s 32 percent and close to Prime Minister Justin Trudeau’s 46 percent.

His fledgling People’s party, though largely unknown, nevertheless polled 17 percent, according to a 2018 Nanos poll. But when it came time to cast their ballots, many Conservatives held their noses and voted for Scheer, heeding former prime minister Brian Mulroney’s warning that voting for Bernier would split the Conservative vote and lead to Trudeau’s re-election. As a result, Bernier’s party received but 1.6 percent of the vote and Canadian conservatives backed a leader who would lose what many expected to be a winnable contest.

Conservatives are less likely to hold their noses in the next federal election and vote for O’Toole, who replaced Scheer by casting himself as “True Blue” and promising that “we’re going to eliminate the Trudeau carbon tax and show Canadians that the Ottawa-knows-best approach for climate change or any issue is wrong.” But O’Toole reversed himself by proposing a carbon levy on Canadians in April. During the Conservative party virtual convention in April, he said, “We must contribute to the fight against climate change. … We cannot ignore the reality of climate change. The debate is over.”

He also proposed a flurry of other government interventions, including partnerships with Big Pharma, entering into the vaccine and PPE businesses, and incentives for investors.

O’Toole’s performance at the virtual convention was but a continuation of a politically correct tack to the left that began soon after he won the leadership. Earlier, he expelled a leadership rival from the party who threatened to be an embarrassment, argued for an increase in foreign aid spending, and adopted social justice rhetoric. Meanwhile, he has been silent on the cancel culture he promised to oppose, and all but silent on the government’s COVID-19 policies, lockdowns, grant giveaways, vaccine passports, and all.

By March, according to an Abacus Data survey, O’Toole’s popularity was in free fall, with 20 percent of Canadians having a favourable view of him, while 32 percent having negative impressions. In August 2020, shortly after winning the leadership contest, O’Toole had 21 percent positive impressions, and 19 percent negative impressions. That free fall is likely to continue, particularly with his Conservative base, which will repay his betrayal in the next election.

Conservatives now have no prospects of winning the next election, little reason to fear splitting the vote next time around, and every reason to vote their conscience by backing Bernier, the candidate who has been worthy of their vote all along but who hasn’t been getting it because of the perception he couldn’t win.

Conservatives can now see that the Scheers and O’Tooles touted as politically savvy winners were in fact the losers, and that while Bernier isn’t about to become prime minister any time soon, he also isn’t likely to play them for fools.

At a recent locally organized anti-lockdown rally in Barrie, Ontario, Bernier rocked an audience of some 1,000 people with his denunciation of authoritarian governments that arbitrarily restrict our movement, close down businesses, and send out police to demand people show them their papers.

“The People’s Party of Canada is the only national political party that is against these draconian measures,” Bernier told the receptive crowd, who afterward lined up to shake his hand and, cheek to cheek, smile for a selfie. “It’s about our way of life. People understand that what is happening is wrong and they know there is never a bad time to fight for freedom.”

Bernier has been taking this message to grassroots protests across the country, a growing phenomenon tailor-made for his message of empowering individuals and businesses against government overreach. He won’t find Erin O’Toole or any other federal political party leader in attendance or willing to share an anti-lockdown stage with him. They aren’t really for the people.

TOPSHOT – Children listen to their teacher as they sit in a classroom. ( MARTIN BUREAU/AFP via Getty Images) OAN NewsroomUPDATED 12:14 PM PT – Wednesday, March 2, 2022 Health experts are raising alarms about […]