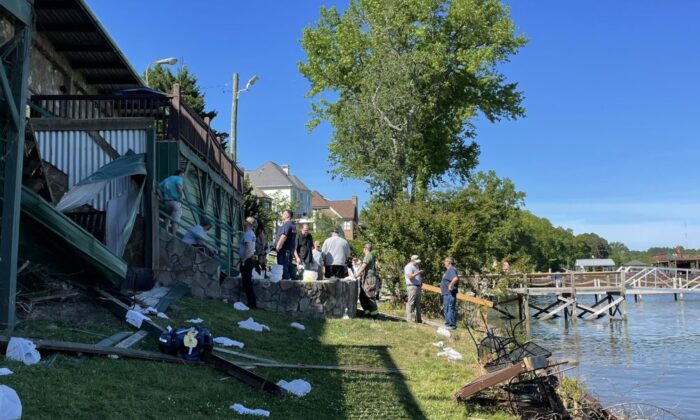 A deck collapsed at a restaurant in Tennessee on Saturday, resulting in at least 11 people being hospitalized, officials said. Two people were critically injured. (Hamilton County, TN Office of Emergency Management & Homeland Security.)

A deck collapsed at a restaurant in Tennessee on Saturday, resulting in at least 11 people being hospitalized, officials said. Two people were critically injured.

Amy Maxwell, with Hamilton County Emergency Management, told News Channel 9 that when people began taking a group photo for a birthday party, the deck collapsed. They were at the Zois Restaurant in Soddy-Daisy.

Dallas Bay Fire Department Chief Markus Fritts added to the outlet that more than 40 people were on the deck when it gave out.

Sondra Teligades, one woman who was injured, told the outlet that she was treated a concussion and rib contusions at Erlanger Hospital.

Other details about the incident were not provided.

Georgia Democratic candidate for U.S. Senate Jon Ossoff is reflected in the window of a supporter during a drive-thru yard sign pick-up event on Wednesday, Nov. 18, 2020, in Marietta, Ga. (AP Photo/Brynn Anderson) OAN […]